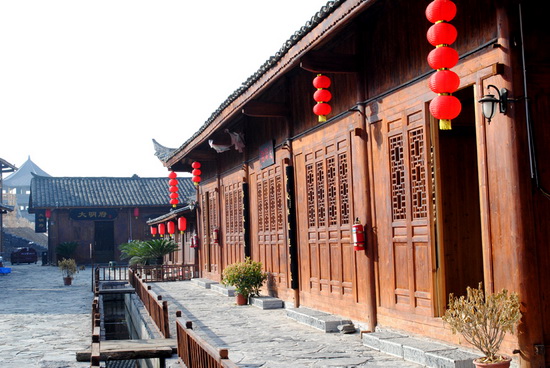 An ancient building in the town of Ming Paradise. [Photo provided to chinadaily.com.cn]

Ranked as a 4A-level tourism spot and receiving 1.19 billion yuan in investment, the town of Ming Paradise has been listed among the first set of cultural industry demonstration bases in Guizhou province.

It is located on the eastern edge of Tongren and spreads out alongside the right bank of the Jinjiang River, adjacent to "the most beautiful town in China," Fenghuang county, a World Natural Heritage site, Zhangjiajie city, and one of the "five famous Buddhism mountains," Mount Fanjing.

Tourists can eat, shop, live, tour and engage in all kinds of entertainment in the town, making it the largest comprehensive historical cultural tourism spot in southwest China.

Guizhou has long been a place beyond the reach of law and civilization, and was once under the dominion of more than one hundred hereditary headmen.

In 1413 AD, Emperor Zhu Li finally founded the thirteenth province, Guizhou, through a series of wars and administrative transformations. Since then, Guizhou has initiated a new phase of development closely connected with the central plains in political, economic, and military terms.

Tongren is situated at the border between Guizhou, Hunan, and Chongqing. The surrounding terrain has made it an important place of refuge and exile throughout history. The well-known South Great Wall also started in Tongren.

During the Ming Dynasty(1368-1644), many different cultures mingled in Tongren, creating a unique regional culture with distinct characteristics. This is the origin of Ming Paradise.

The town of Ming Paradise is divided into eight different sections: a performance square, a marketplace, a military zone, a dragon boat camp, a fishery village, a historical winery, a water playground, and a children's pavilion.

Together with Zhangjiajie city, Fenghuang county, and Mount Fanjing, a new pattern of tourism is taking shape, and many tourists are expected to visit Ming Paradise to learn about the 600-year history of Guizhou.

As a town of culture and history, Ming Paradise is expected to become an important showcase for the 600-year history of Guizhou.