Wang Fangren, born in 1930, has been given the title of the main inheritor of the Twelve Tunes of the bronze drum in Biandanshan village, and is known for his diversity and acclaimed renditions of representative works of the Bouyei intangible cultural heritage, from their sacrificial tunes to their jubilant tunes.

A photo of Wang Fangren. [Photo/gzwht.gov.cn]

He learned to play the bronze drum from his father at the age of five. He was asked to recite the rhymes sentence by sentence.

He practiced playing the bronze drum from 1945 to 1965 under the instruction of his father, and become skilled at playing it when he was 40 years old. He has mastered various musical styles with bright and powerful rhyme featured special local characteristics.

In 1978, he started to teach students and selected two young people in his family according to ancestral rules. He taught them by instilling rules and leading by example, and they can now give performances on their own.

He has given performances at important activities at the county, municipal, and provincial levels, winning several awards and receiving high praise. He has also been a champion of the intangible cultural heritage by taking part in high profile interviews about the bronze drum. 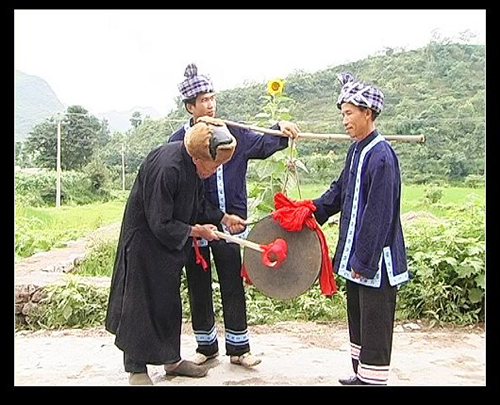