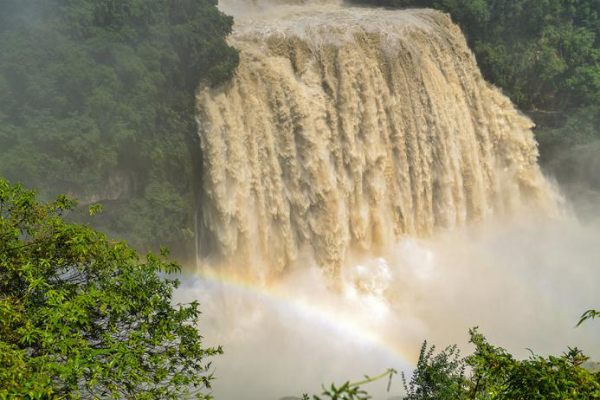 Affected by sustained rainfall, the Huangguoshu Waterfall on June 20 saw its maximum flow in this year's flood season, with the flow rate reaching 395 cubic meters per second. [Photo/Xinhua]

The spectacular waterfall is 77.8 meters high and 101 meters wide. Situated over the Baishui River in the Buyi and Miao ethnic groups' autonomous county, it is part of a karst landform and was named after the Huangguo tree, a special plant species found in the region. Behind it is a 134-meter-long water-curtain cave, which allows tourists to go inside, touch the waterfall and even see a rainbow arching across the fall on a sunny day.

In Huashishao village on the lower stream of the waterfall, there are 13 ancient banyan trees, the biggest of which takes three pairs of outstretched arms to encircle it. Huangguoshu Waterfall and 17 other minor waterfalls of different sizes form the largest waterfall cluster, according to the Guinness Book of World Records. The national park also encompasses many other natural and cultural resorts, including Stone Village, Tianxing Bridge, Dripping Shoal, Balinghe River Valley, Red Cliff, Rhinoceros Pool (Doupotang) and Huangguoshu Hotel.

With refreshing air (over 28,000 negative oxygen ions per cubic centimeter), a pleasant climate (average annual temperature at 16 C) and a human touch from the various ethnic groups that live there, the park was listed among the "most beautiful places in China" by Chinese National Geographyand one of the "Top 10 tourist resorts for customer satisfaction in China" by national media outlet People's Daily.

Children no taller than 1.4 meters or no older than 14 years can visit the Park free in the company of ticket-holding adults.

Students and juveniles aged between 15 to 18 years can enjoy a 50 percent discount with valid certificates.

1. Remember to take an umbrella or raincoat to the falls.

2. Luggage can be stored at the tourist service center, free of charge.