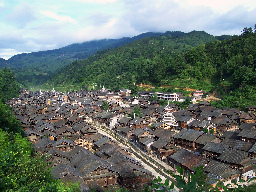 The Qianxinan Buyei and Miao Autonomous Prefecture is located in the southwest of Guizhou province. The city covers an area of about 16,804 square kilometers; the highest point in the territory is 2,207.2 meters above sea level while the average altitude is 275 meters. By the end of 2004 the total population had reached 3.09 million, among which, 42.47 percent were minor ethnic groups.

With vast karst topography that consists of valleys, caves, waterfalls, underground rivers and stone forests. Qianxinan is recognized as a brilliant tourist gem in Southwest China. Besides, its charms also lie in splendid historical relics and unique customs of local ethnic groups.