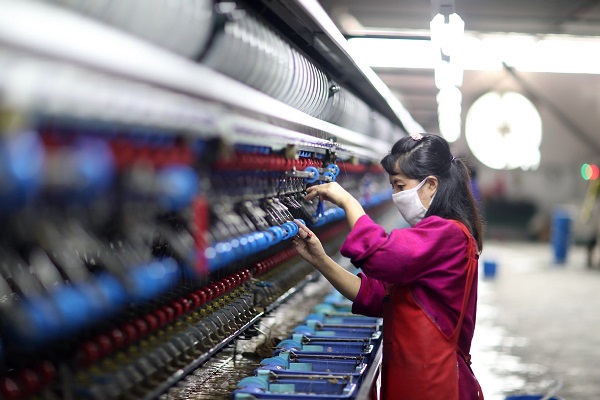 An employee works on a loom at a silk production factory in Rongjiang county, Guizhou province. [Photo/XINHUA]

In a factory belonging to Hengsheng Silk, swarms of silkworms wriggle over mulberry leaves placed inside large plastic containers.

Hengsheng Silk in Jichang, Guizhou province, specializes in cocoon processing and silk making and has two factories in the township. In addition, the company also owns fields of mulberry trees in the village of Linpan, which is under the jurisdiction of the township.

Silk, in addition to fine china, was a pillar of foreign trade in ancient China.

For more than 4,000 years, the Chinese people have bred silkworms for their fine silk, which was considered a symbol of status and luxury in the past.

However, as the country's urbanization drive goes into full gear and pushes up land and labor costs on the eastern seaboard, the traditional silk-making industry is shifting further inland, with many companies, like Wang's, setting up factories in the western part of China.

From east to west

Wang's business originally started in Jiangxi province, however, in recent years he moved his business west to Guizhou and Sichuan province.

"The environment and the climate here in Guizhou are perfect for raising silkworms," Wang said.

Suitable temperatures for silkworms range from 22 C to 30 C. They don't thrive in cold and dry weather. High temperatures and high humidity also threaten their survival.

Jichang is about 1,000 meters above sea level and is cool in summer and moderately cold in winter.

With a good natural environment, the area is perfect for the development of sericulture, or silk production. "The unique climate and good environment have created wonderful conditions for silkworms, and the silk they produce is of high quality," local official Wang Chun said.

In Linpan, swathes of mulberry trees sway in the wind. The mulberry leaves are the "granary" of countless silkworms in the village.

"The township has more than 1,350 hectares of mulberry trees, as well as silkworm warehouses of about 100,000 square meters in area," Wang Chun said.

Out of its cocoon

Each hectare of mulberry trees has a production value of about 75,000 yuan, much higher than traditional crops such as corn and potatoes.

Wu Peiguang, 56, used to be mired in poverty. He has three children in school counting on him and can rake in more than 3,000 yuan a month thanks to silk production.

"I have begun to grow mulberry trees on my farm and I also make some money by taking care of silkworms in the village," Wu said.

The village has a rural cooperative to raise the silkworms, with experts invited to impart their skills.

The cocoons are taken to the factories in the township to be broken down and processed into silk. Hengsheng Silk has 10 production lines to break the cocoons into silk lines. They can process more than 2,000 metric tons of cocoons each year, and the silk they produce is popular in Europe and South Asia.

"Our company offers more than 500 jobs for local people," Wang Yanghai said. "We have lifted 3,000 families out of poverty by engaging them in sericulture."

Villager Xi Zhengyang is one of them. "I used to work in an electronics factory in the eastern part of China but my health deteriorated and I had to stay at home," Xi said. "After joining the company I started breaking down the cocoons and I can make more than 4,000 yuan a month."

Wang Yanghai said the coronavirus epidemic disrupted the company's business, both at home and abroad. "Silk has always been an important part of international trade. I hope that the world gets better soon and that business will return to normal," he added.