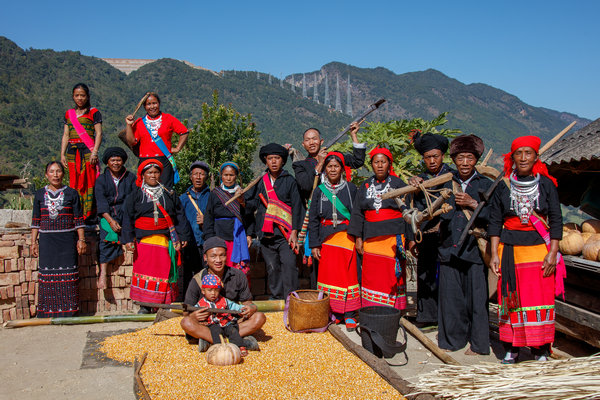 Four years ago, when photographer Chen Lin traveled to a rural village inhabited by the Miao ethnic group in Southwest China's Guizhou province, he happened to encounter a local wedding, where the bride wore a traditional handmade Miao-style costume－with sophisticated embroidery that had taken several years to finish－while the groom was in a modern suit. Chen was surprised because, among the Miao people, even the man usually wears a dazzling costume for his wedding, known for its silver decoration and fancy embroidery.

The groom told Chen that he left the village to work in a big city five years ago. The young man thought the modern suit is more fashionable and convenient to wear than Miao costumes. It was then that the photographer recognized the need to record the diverse costumes and architecture of China's different ethnic groups.

"If I don't start taking photos, I'm afraid these things will fade into memory and, in as little as 10 years, it will be impossible to see these traditional aesthetics," says Chen, referring to the inevitable influence of modernization on the lives of the ethnic groups.

Since 2016, Chen has devoted himself to his five-year project to take photos of the families of 56 ethnic groups living in different provinces in China. His tally so far is 37 of the groups.

Each ethnic group has their own culture and language. The simple way to identify them is by their appearance and their houses. Chen decided to focus on families in traditional costume, especially big families with four generations all together.