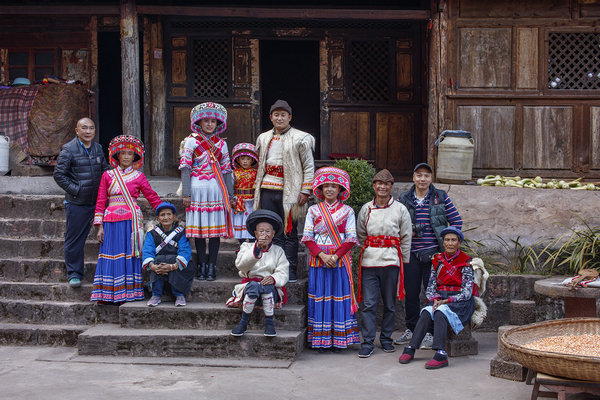 Photographer Chen Lin (left) takes a group photo with a family of four generations, the eldest member of which is 84 years old, from the Lisu ethnic group in Yunnan in 2018. [Photo provided to China Daily]

Chen says he sometimes worries that the speed at which he is taking pictures can't catch up with the pace at which the cultures are receding. However, he takes comfort that the government's programs to raise awareness is gradually awakening people's desire to protect their culture.

In November, he went to take photos of the Li ethnic group in Hainan province, a group of more than one million. The group's traditional houses are built like up-side-down boats.

Chen was told that years ago, locals didn't wear their costumes and felt ashamed of their own identity because they were regarded as poor. With the fast development of local tourism, people now are proud of their culture and are actively protecting it.

Chen employs a traditional film camera to take large frame photos that can end up being presented as pictures more than a meter high. His photo equipment is much heavier than that used with digital cameras. That's why driving to his destination is a convenient way for him to take all of his gear, which weighs more than 100 kilograms.

Chen uses "friendly and nice" to describe the different people he has met. He remembers two Tibetan women who helped him carry his heavy equipment to the top of a mountain. Locals treated him to delicious food and provided beds for him, all for free.

"Although each ethnic group has its own personality, we Chinese are a big family."

All of his subjects are now gathered in an online chat group. It consists of hundreds of people from diverse ethnic groups and, although they're strangers to each other, they communicate with each other about their local cuisine, landscape and daily life.

Every year, Chen spends two months driving and photographing. The rest of the time he works as a film director and commercial photographer to support his special project.

The Beijing-based photographer is planning a trip to the Xinjiang Uygur and Tibet autonomous regions in August to capture images of families there. Apart from taking photos, he will start using short films to document his mission and better record the unique culture of each group.

"The more I learn about each culture, the more I want to record. They're fascinating."