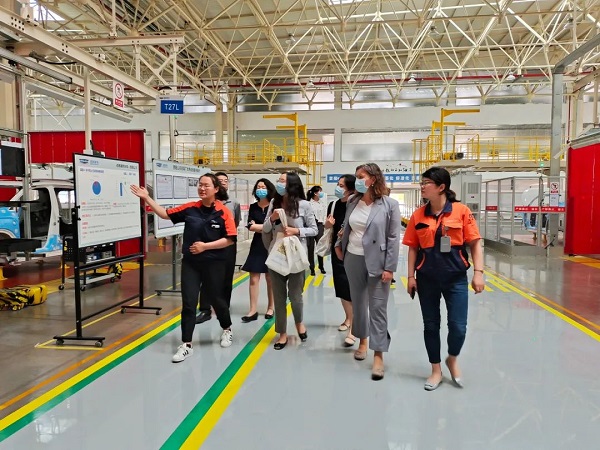 The German delegation listens to an introduction at Geely's plant in Guiyang. [Photo/wechat account of Guiyang foreign affair office]

Zhang Mingquan, head of Guiyang foreign affairs office, outlined the current level of cooperation between Guiyang and Germany, and the opportunities for future cooperation with the State of Bavaria.

Both sides discussed the possibilities in terms of designating sister cities, and in big data and middle and high-end manufacturing.

According to Zhang, as the largest federal state in Germany, Bavaria has advantages in auto manufacturing, information and communication, and environmental protection technologies.

Guiyang wishes to keep communicating with the State of Bavaria China Office to accumulate cooperation resources and build a friendly exchange platform to further Guiyang's opening-up.

The delegation learned about Guizhou's history of big data development, especially Guiyang's achievements gained as a pioneer in the big data industry.

At PixMoving Inc, a self-driving startup based in Guiyang, the delegation showed great interest in the company's driverless vehicles, and tried the cars after listening to an introduction by the technical team about their technology and production.

Lucie Merkle, chief representative of the office, was impressed by the driving experience and showed willingness to cooperate with the company.