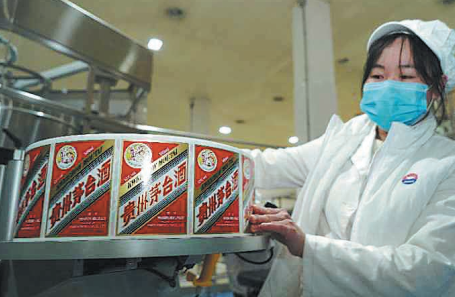 Chinese distiller Moutai is the world's fastest growing brand, according to the top 100 global brands list. It rose 17 places from 2019 to become the 18th most valuable brand in the world.

The rankings of the 2020 BrandZ Top 100 Most Valuable Global Brands were released by communication services group WPP and consulting company Kantar at the end of June.

Moutai, valued at more than $53.75 billion, came in just after internet giants Alibaba and Tencent, which took sixth and seventh positions in the rankings respectively. 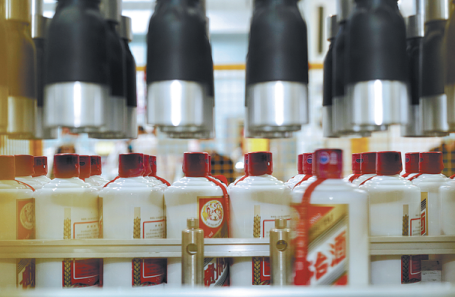 Rows of Moutai liquor are sealed on the production line. CHINA DAILY

"We see a significant improvement in brand equity now compared to 10 years ago because businesses understand the importance of investing in brand building and are stronger and more resilient as a result," said David Roth, CEO of The Store WPP for the Europe-Middle East-Africa region and Asia, and chairman of BrandZ.

"While COVID-19 has impacted every business regardless of size or geography, consistent investment in marketing can and will help carry you through a crisis," Roth said.

Doreen Wang, global head of BrandZ at Kantar, said Chinese companies have established a reputation for innovation and taken center stage in the global business community.

Despite the difficulties amid the COVID-19 outbreak, Chinese brands still achieved growth, assuring consumers worldwide and reinforcing the foundation for exploring abroad, she said. 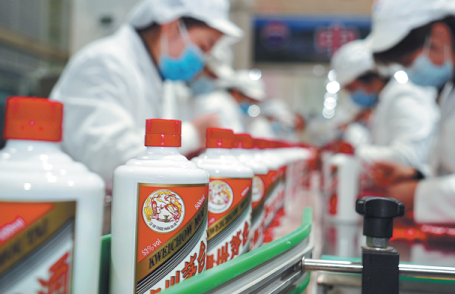 As a shining example among them, Moutai has maintained strong growth in brand value.

Since its 2012 debut at 69th on the BrandZ top 100 list, the rankings have witnessed its international standing advance rapidly.

The BrandZ rankings are "a precious partner to accompany Moutai moving forward", said Li Jingren, vice-chairman and president of Kweichow Moutai Group, which is headquartered in Guizhou province, Southwest China.

With its brand value rising year-on-year, Moutai is on a fast track to high-quality growth, Li said.

Behind the growth is the company's stringent quality control standards, the most critical factor in its brand value, according to the senior executive.

Moutai is considered one of the best distillers worldwide, created in a special environment where the soil, climate and terrain contribute to the liquor's unique qualities, Li said.

It generally takes at least five years before Moutai spirits can be bottled for sale, according to the company. 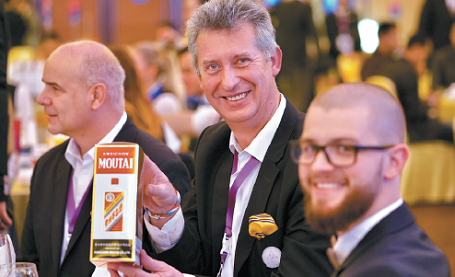 Its thick skin and rich nutrients are suitable for the multi-distillation requirements of Moutai, yet its yields are not as high as expected. This is because it can only be produced in Renhuai where the distiller is located, as well as nearby regions, he added.

The complex production also requires experienced workers and technicians to repeatedly prepare and brew test batches before they can make it, Li said. "To ensure the quality and taste, we have not only built up teams of excellent craftsmen and liquor-making engineers, but also have state-of-the-art equipment for distillation, analysis and data detection," he said.

"Moutai believes that only if it produces the best liquor in the world can it lay the firmest foundation for its brand value growth."

The enormous Chinese market provides the strongest support for Moutai's growth, he stressed. "China's reform and opening-up and economic rise over the past four decades have nurtured a large market with more than 1.3 billion people, where if your product is popular and well recognized, you will certainly gain huge space for growth.

"In this regard, Moutai is fortunate to have grown in one of the most dynamic markets and an open and inclusive economic environment. The former gives us the strength to grow, while the latter provides us with the opportunity to learn from outstanding peers such as Coca-Cola and Diageo."

Li said: "Cultural consensus and synergy have strengthened the foundation for Moutai to make further progress."

The Chishui River Basin, where Moutai is located, has been thought of as the most active industrial belt in the global spirits market in recent years. 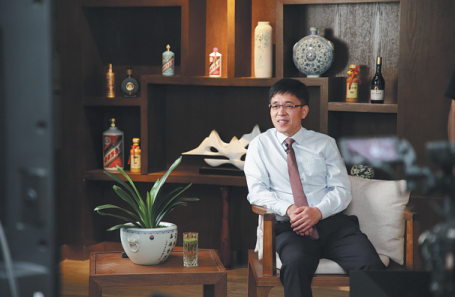 Over the past decade, the taste of Chinese consumers has gradually changed due to the improved quality of sauce-flavored baijiu (traditional Chinese liquor made from grain).

In the past five years, sauce-flavored baijiu led by Moutai has become increasingly popular in the Chinese spirits market, Li said. "A growing number of companies in the industry have begun to produce this kind of baijiu with more complex processes at a higher cost, attracting more consumers."

Since 2018, the company has been applying its Cultural Moutai branding strategy to shape its corporate image and temperament using international perspectives and world vision amid the context of globalization. The move is also aimed at offering cultural experiences to consumers with different cultural backgrounds, Li said.

Moutai has recently mobilized six other peer companies to sign the Joint Development Declaration of Enterprises in the World Sauce-flavor Liquor Core Production Area. They make commitments to create better conditions, set stricter standards, establish a better reputation and undertake more responsibilities for the growth of the production areas along the Chishui River.

"I believe that with progress in our cooperation, Moutai will win more opportunities and broader spaces to increase its brand influence," Li said. 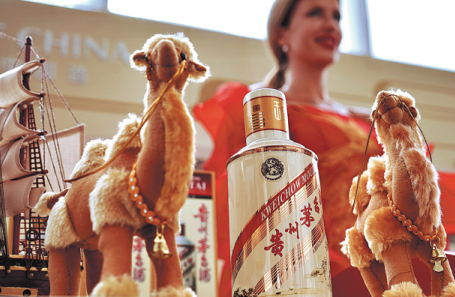 Moutai liquor is displayed at an overseas distributors' conference in 2019. CHINA DAILY