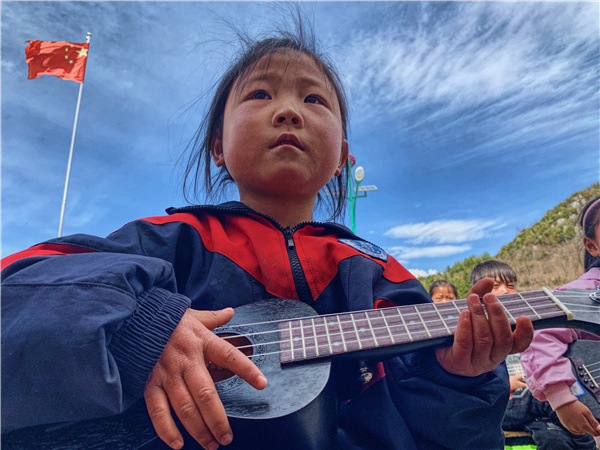 A girl learns how to play ukulele in the school's playground. [Photo provided to China Daily]

In September 2018, the school's first band was formed to encourage more students to learn music. Consisting of five girls, the band was called Yu, which means "encounter".

Gu hoped that playing music together in the band would give his students a sense of enjoyment and a new experience.

He has posted some of the band's practices on his Sina Weibo account and WeChat moments, which has attracted widespread attention. Over the past two years, more than 200 instruments, including guitars and basses, were donated by companies, organizations and individuals to the school.

Students in Grade 1 and 2 learn ukulele and guitar, and students from Grade 3 to 5 are taught drums, bass and tambourine.

In March last year, the Yu band was invited to attend the recording of a TV program in Tianjin. It was the first time they had been on a plane, or even out of their province. They performed a song written by their teachers, called Song of Haiga.

In July last year, the five members of Yu graduated from the school. Following them, the second band, Weizhi Shaonian, was formed to pass on the musical torch.

"Many of the students will not continue to study music after graduation. I just hope that this will be a great memory when they grow up," Gu says.

What warms Gu's heart is that music makes such a difference to children in the mountains, who have limited contact with the outside world.

Li Meiying, Yu's pint-sized guitarist, says in a video posted online that music gives the children a chance to relieve some of the stress they feel at school. "I love the community we've formed through music," she says, adding that "I hope our band will stick together in the future".

For Gu, music brightens the life of both the teachers and students at Haiga, and he invites more teachers, especially those in the countryside, to get music into education.