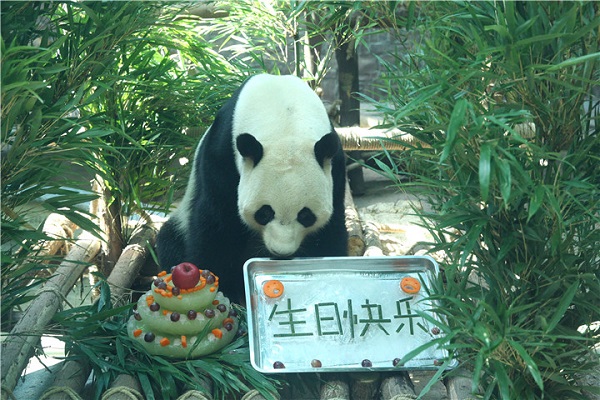 Qianlingshan Park serves a three-layer ice cake for the pandas to celebrate their birthday. [Photo/ddcpc.cn]

It is their third birthday since moving to Guiyang. Over the past three years, the pair has been taken good care of and has enjoyed the cool weather in Guiyang.

Xingbao was born in Madrid, Spain on Aug 30, 2013, while Haibang was born in Wakayama, Japan on Aug 11, 2010. To create a special joint birthday for the giant pandas, the park chose Aug 30 as a day when they can celebrate their birthdays together.

The panda house at the park was decorated with balloons spelling "happy birthday" and there was a three-layer cake made of ice, grapes, carrots and apples - the layers standing for the three years that the pandas have spent in Guiyang.

According to the panda house, the pandas have become representatives of Guiyang's biological diversity, and also attract the attention of the world to Guizhou's efforts in terms of ecological civilization construction and environmental protection.

Fans from Spain and Japan pay close attention to the growth of both pandas, and sent birthday cards and videos to the park to celebrate the pandas' special day.