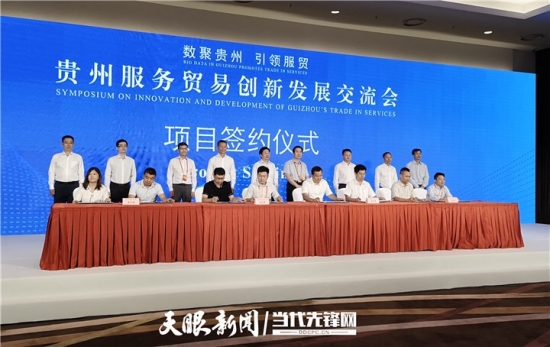 Representatives from Guizhou sign projects with various companies at the symposium on innovation and development of Guizhou's trade in services on Sept 6 during the CIFTIS. [Photo/ddcpc.cn]

During the China International Fair for Trade in Services (CIFTIS), which is taking place in Beijing from Sept 4-9, Guizhou signed eight projects with companies from Argentina, the United States, Laos and other countries and regions.

The companies which signed with Guizhou are mainly involved in big data services, software development and engineering design.

In recent years, Guizhou has attached great importance to trade in services, and has utilized its advantages in big data, tourism, healthcare and architectural engineering to organize business fairs which can help local companies develop domestic and international markets.

Since the beginning of this year, Guizhou has signed about 620 cooperation projects, including about 150 international projects and 470 domestic projects.