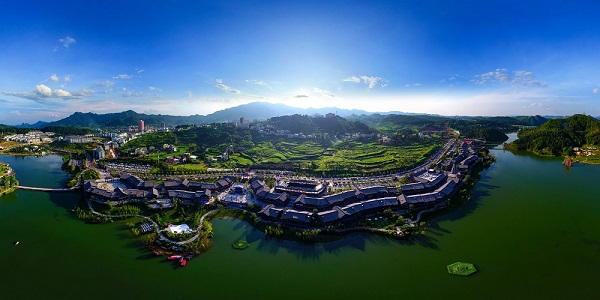 Danzhai Wanda Village in Southwest China's Guizhou province was selected as one of China's top 10 intellectual properties (IPs) of 2021 on Sept 3, along with the opening and closing ceremonies of the Beijing 2022 Winter Olympics and its mascot Bing Dwen Dwen.

The selection was held by the joint conference of the National Copyright Trading Center and selected IPs in terms of innovation, communicating effect, influence, national characteristics, artistry, and commercial value.

According to the organizing committee, Danzhai Wanda Village started from scratch and became a successful example of alleviating poverty through tourism development.

After five years of operation, Danzhai Wanda Village has received more than 32 million visits and helped Danzhai shake off poverty two years ahead of schedule. It has become popular among tourists.

Over the past five years, Danzhai Wanda Village has won various honors such as being named a United Nations' poverty reduction case, the World Tourism Alliance's best example of poverty alleviation through tourism, and a national nighttime culture and tourism consumption cluster.