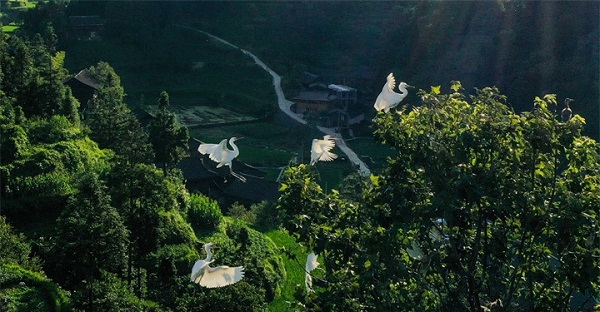 Attracted by the excellent environment in Jiyou Miao village, herons come to breed there every year. [Photo/ddcpc website]

In Jianhe county in the Qiandongnan Miao and Dong autonomous prefecture – located in Southwest China's Guizhou province – more than 1,000 herons are currently living in about 500 nests on a 300-year-old maple tree in a village.

According to the locals, Jianhe's Jiyou Miao village has more than 1,000 trees that are a century or more old and a forest coverage rate of 90 percent. In addition to pine trees, cedars and maple trees and Chinese sweet gum trees, the village also has rare tree species such as Chinese coffin trees – a species of conifer – as well as Chinese yews and beeches.

It has been more than a decade since the herons first came to the village. They usually come after the Qingming Festival to build nests and breed and then leave in October. The most commonly seen herons are egrets, pond herons and night herons.

The superb eco-system has given the village its biggest development advantage and competitive advantage. As a result, Jiyou Miao village has also won the titles of Chinese ancient village and national forest village, in recognition of its excellent environment and rich ethnic culture.

Every year, on the second day of the second month of the lunar calendar, the village holds the Zhaolong Festival, when all the locals plant trees.

Experts say the herons live in groups and prefer to nest on the tops of tall trees. The village's 60-meters-high tree provides an excellent spot for herons to roost and hunt.

Currently, the birds have become a celebrated sight in the village, making it a famous tourist spot. That's paid off financially and last year, the per capita annual income of the village's 1,040 people exceeded 10,000 yuan ($1,443).

Besides agritainment, the village has also developed a breeding industry and crop farming. It's got into fish breeding, pig breeding and growing pod peppers and plants that supply traditional Chinese medicine.