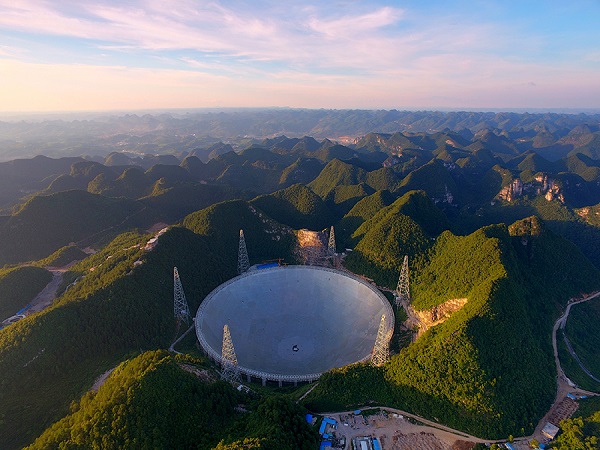 Guizhou's FAST serves as both a scientific research center and a science popularization center. [Photo by Dai Chuanfu for chinadaily.com.cn]

Pingtang county in Southwest China's Guizhou province is home to a massive piece of equipment designed to unlock some of the mysteries of the cosmos, called the Five-hundred-meter Aperture Spherical Radio Telescope, or FAST – the largest one of its kind in the world.

In recent years, Pingtang has taken advantage of its presence to develop tourism based on astronomy, attracting hordes of enthusiasts. At FAST's science popularization center, the county has built two reception centers, two four-star hotels and 20 public toilets – as well as established a smart tourism system, an ecological park, and laid out more than 80 kilometers of roads.

Pingtang can now receive more than 30,000 visitors a day. In addition to a watchtower and an astronomical experience hall, the science popularization center also has exhibition halls, commercial streets, cinemas and recreational areas.

To date, the center has been recognized as one of China's top 10 technology tourism bases, as well as won accolades as a research-oriented study and education base for primary and middle school students and as a China International Culture Communications Base for Overseas Chinese.