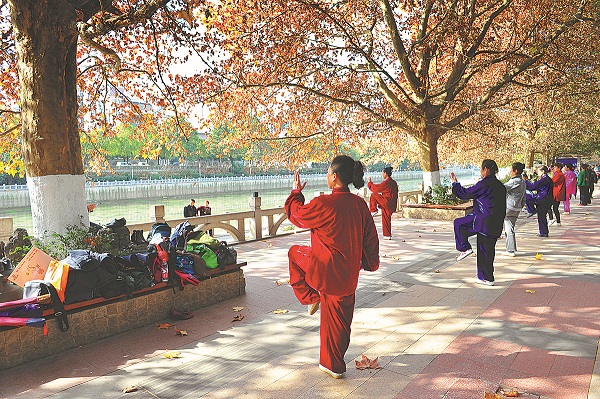 Residents exercise by the Nanming River in downtown Guiyang. [Provided to China Daily]

Liu Chuxia, deputy head of Guiyang's water resources management bureau, said the turning point came in 2012, when the Guiyang government launched a campaign to eliminate pollution in the river.

She said waste water used to be collected and sent for disposal via a network of pipes to a sewage treatment plant far downstream from Guiyang, but there were huge difficulties not only in building the network but also in maintaining it.

There were frequent leaks from the pipes in the city, which has a karst landform, she added.

Liu said that when the campaign was launched, the Guiyang government decided to innovate by building disposal facilities and recycling reclaimed water near sewage sources.

After 2017, another 14 such underground facilities were built in the city, according to the local authorities.

Liu said Guiyang was the first Chinese city to use "distributed facilities" to dispose of sewage.

The water quality in some urban stretches of the river used to be below Grade V, the lowest level of the national five-tier grading system for surface water, she said.

Thanks to the new facilities, the city has cleared all 25 black and odorous bodies of water on the river and the water quality on some urban stretches has reached Grade III. "The river's self-purification capacity has gradually been restored," Liu said.

Every day, 1.5 million metric tons of reclaimed water is discharged into the river from the sewage plants, greatly easing water depletion that jeopardizes the aquatic ecosystem.

In addition to an improved environment for local residents, the mode of sewage disposal, which is cost-efficient and saves land resource, has enabled the local government to tap more business opportunities in the Nanming River Basin.

For example, the 14 underground plants built after the Qingshan facility led to savings of 1.5 billion yuan ($232.5 million) in building a sewage pipe network and acquiring land. If they had not been built underground, these plants would have occupied about 11 hectares of land, Liu said.

"This mode helps resolve the difficulties mountainous cities have in finding land to build sewage disposal facilities," she added.