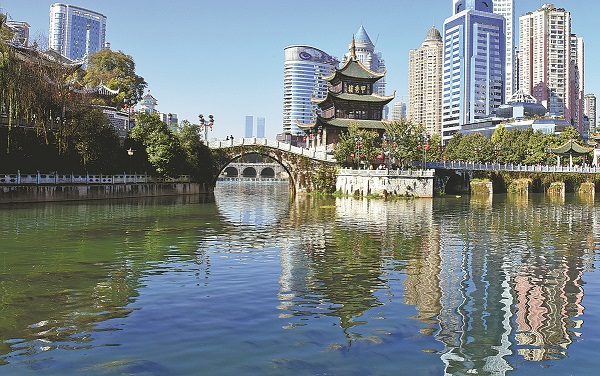 The Jiaxiu Pavilion, a landmark ancient building, stands near the Nanming River in Guiyang. [Provided to China Daily]

Yin Kaiyun, who has run the Huayuan barbecue restaurant near the pavilion for seven years, said, "Since July, we've often been busy until after midnight."

The 47-year-old's business has only 30 tables, each catering to about 10 groups of customers a day. People often wait about an hour for a vacant table, Yin said.

He added that about one-third of his customers are tourists from outside Guizhou, seeking relief from the summer heat.

According to the Nanming district administration of tourism, thanks to the environmental improvements on the Nanming River, construction of leisure facilities, along with commercial development, the number of tourists to the district soared from about 6.4 million in 2012 to 24.3 million last year.

The district's tourism revenue, which has risen on average by 15.6 percent a year since 2012, reached 56.1 billion yuan last year, despite the impact of the COVID-19 pandemic.

Wang Yaojun, deputy head of the administration, said: "Many scenic spots near the Nanming River have become highly popular tourist destinations. The campaign to clean up the waterway has produced immeasurable results."

Hou Jinzhi, the senior who lives near the Qingshan sewage disposal plant, said: "The Nanming River has now returned to how it was in my childhood. The environmental improvements make me feel very happy."