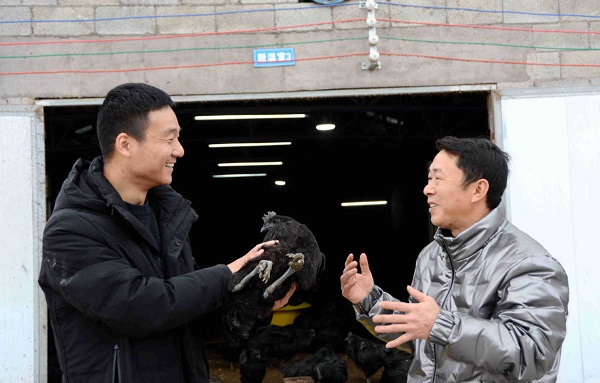 Backwater regions in Southwest China's Guizhou province are forging ahead with rural vitalization after shaking off poverty thanks to assistance from the Ministry of Public Security in the past decade.

From about 2012 to the end of 2020, the ministry channeled more than 2.4 billion yuan ($377 million) to Pu'an county and the city of Xingren in the Qianxinan Bouyei and Miao autonomous prefecture.

Forty-four of the 70-odd villages in Pu'an county used to be impoverished, with about 83,000 residents trapped in poor financial conditions. The county, which had a total population of 350,000 in 2011, was lifted out of poverty in 2020 with the ministry's support.

China faced an arduous task in eliminating poverty, so in 1986 each ministry and central department was assigned several counties or villages, where they provided specific assistance or solutions to improve livelihoods. Since the eradication of absolute poverty around the nation last year, the focus of the program has switched to consolidating that progress and rural vitalization.

Pu'an county's rural vitalization bureau said the Ministry of Public Security had not only helped channel financial support but had also given residents practical assistance in house relocation, tea planting and finding jobs outside the province.

The bureau said the ministry has invested about 200 million yuan to help develop the county's tea industry, giving 16,800 people stable lives with increased incomes. It has also helped connect residents with 171 companies in Zhejiang and Guangdong provinces that have offered 73,428 jobs.

Deng Wei, head of the health center in Gaomian, a town in Pu'an, said he was very grateful for the ministry's help in renovating the center, which used to be shabby and short of medical devices.

"The ministry started to support us in September 2018," he said. "It allocated about 4.8 million yuan to help us renovate the hospital.

"We used to have poor-quality facilities, with the houses and wards cracked. The hospital has now taken on a new look thanks to the ministry's help."

Deng said residents had previously needed to see doctors out of the town or even out of the county due to the shabby state of its medical facilities, but they could now receive health checkups in the town.

"The good-quality medical facilities have greatly solved residents' problems in seeking better treatment and improving their sense of happiness," he added.

Zheng Fei, a formerly impoverished student in Gaochao village, Pu'an, said she would never have been able to continue her education and get a decent job without help from the ministry.

"I received 72,440 yuan from the ministry from 2017 to 2021 to finish my college education," she said. "Their help to me is not just financial but also to the heart, as I would never have gotten to learn so much and make so many good friends at college.

"I'm now a teacher and live a rather good life. I will never forget their help to me and to my family."

In addition to providing some financial support, the ministry also dispatched staff members to investigate the villagers' problems and give them practical guidance.

Jiang Youliang was sent to Xingren's Laoliqi village by the ministry about five months ago and now serves as acting village Party secretary.

"I got the mission in August 2021," he said. "The village used to be an extremely impoverished area with barren land and a harsh natural environment. However, it turned into a pioneer zone for the province's rural vitalization work last year thanks to the development of the chicken farming and pearl barley industries.

"I'm now in a new working environment and it's necessary to get used to it. I'm working to investigate village industry and try to formulate a plan for the future. It's key to invigorate industry in order to boost rural vitalization.

"As long as we have prosperous industry, we have good incomes, then the villages will be flourishing."

Wang Jin in Guiyang contributed to this story.