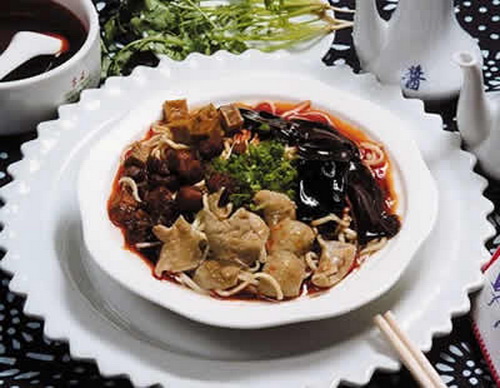 Among the many delicious snacks of Guizhou, changwang noodles best demonstrate the knife skill needed for Shanxi sliced noodles, the elasticity of Lanzhou's pulled noodles, the taste of Sichuan's Dandan noodles, and the savory taste of Wuhan's hot-dried noodles Changwang noodles are famous for three characteristics -- color, aroma, and taste – and are used with pig's blood, for crisp noodles, or spicy, delicious soup. They can be red, but not spicy, oily, but not greasy, and crisp but not too crisp.

They date back to the late Qing Dynasty and it has been said that, more than 100 years ago, there were many meat stands in the North Bridge area of Guiyang and, at the end of the bridge, there were two noodles shops named Fu's and Yan's, for the owners. To attract customers, they would use pig intestines ('chang' in Chinese) and blood ('wang') for their noodles and, thanks to the competition between the two, chang wang noodles just kept on improving, giving them a solid reputation in Guiyang. They are unique not just because of the savory taste of intestines and blood but also because of the deep-fried minced meat which is just as important. The pig's intestines and blood are made into gravy then the pork is fired for gravy, then red pepper oil added, for the basic Chang wang noodles ---"three types of gravy".

The secret also lies in the noodles, which are hand-made egg noodles. Take 500 grams of flour, four eggs, a little edible alkaline and water, then knead repeatedly for the dough. Place the dough on a chopping board and fold and roll it repeatedly to make it thin as silk. Sprinkle on the bean powder, fold the dough, then shred it, for the "three turn-overs, four strokes, and nine slices" process. The cooking method is also very important. For authentic Chang wang noodles every bowl of is cooked separately. Several bowls are never cooked in a large pot at the same time. Take a bowl of dry Chang wang noodles, made from 80 grams of flour, and immerse them in boiling water, using chopsticks to see whether they are straight. When they are, scoop the noodles up with a colander, rinse them with cold water, then place them quickly into the stockpot and heat it. After they shrink, put them in the serving bowl with bean sprouts in the bottom, pour on the chicken broth, add slices of pig intestine and pork blood and the crispy minced meat, add a touch of red pepper oil and some shallots, and your perfect bowl of Chang wang noodles is ready.