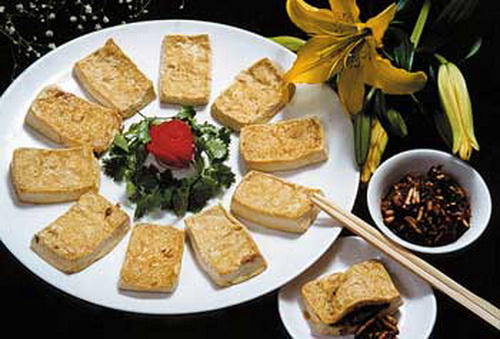 Grilled beancurd is a good dish with wine in Guiyang. The beancurd is cut 3 cm in length and 0.5 cm thick, then it is baked on a barbed wire above a sawdust-burning brazier after being soaked in marinade.

When it gets brown, it is cut from the side and garnished with ingredients, including cilantro, cayenne pepper, diced spring onion, soy sauce and vinegar.

It is said that during the War of Resistance against Japanese Aggression (1937-1945), a young man surnamed Zhang lived on selling beancurd in Hongbianmen of Guiyang. One day, he had no time to handle his business because of a war alert and the beancurd went stale. His girlfriend comforted him and baked the staled beancurd in fire. Then discovered it was very delicious with pepper and salt. The man made beancurd in that way and it sold well. They operated the business together after marriage.

In Guiyang, young people on an excursion often come all the way to try the special dish, and some of them get married. So it is known as "romantic grilled beancurd". The descendants of the Zhang's resumed the business after 1978.