China's Moutai, one of the world's top distilled spirits and the subject of a profound liquor culture handed down for the past hundreds of years, is now finding new fans in South Africa.

Nabeel Nielsen is a businessman engaged in the garment trade between China and South Africa. While he was in China, he had his first experience of the Chinese baijiu. The liquid's special flavor and fragrance was a great surprise and made a very good impression on him.

He was told by his Chinese friends that one of the baijiu brands enjoying great popularity is Moutai from Guizhou, which is honored as the state liquor and which he should try at his first opportunity.

That opportunity arrived last November, when Moutai entered the South African market. Nielson brought several friends to visit a Chinese restaurant for a taste test of the liquor.

As with others in South Africa, Neilson was initially struck by the mysterious and strong fragrance when the Moutai bottle was opened.

The liquor's scent actually started gaining an international reputation a century ago when Moutai was featured at the 1915 Panama Pacific International Exposition.

On Feb 20, 1915, the exposition was held in San Francisco in the United States. It was considered the largest international fair worldwide in the early 20th century, attracting more than 200,000 participants.

At the time, Guizhou province recommended the sample liquors from the two workshops of Chengyi and Ronghe under the name of Moutai Winemaking Company as exhibits.

Compared with other delicately packed liquors from other countries, Moutai liquor was stored in pottery and was seldom requested by visitors. Approaching the end of the expo, one of the Chinese representatives got an idea and pretended that he had accidentally dropped one bottle of Moutai liquor, with it smashing on the floor.

Suddenly, the fragrance of the liquor permeated the hall, attracting all the members of the panel. After rounds of tastings, they agreed that Moutai liquor was one of the best drinks in the world and Moutai received the gold award.

In 2017, the pre-tax revenue of Moutai reached 76.4 billion yuan ($11.9 billion), realizing a net profit of 26.4 billion yuan and accounting for 72 percent of the baijiu industry's foreign exchange earning across China.

A long process still needs to take place before Chinese liquor finds a major following in Africa. Yet the experience usually starts from the aroma of the liquor, which provides a unique sense of satisfaction as it helps to release the sense of flavor in the mouth.

Gregory September is a professor at a university in South Africa. After he tasted the liquor, he said Moutai is different from any liquor he has ever experienced. Although it has a high alcoholic content, it has an unexpectedly mild taste.

He has a strong interest in Chinese culture and said he often hears his Chinese friends talk about liquor and ancient poets creating poems after drinking. After tasting the liquor, he seems as if he got into the mysterious feeling himself.

It is worth mentioning that Moutai also now has a presence at local bars, and is becoming more popular there.

Ronald Fangoma is an owner of a bar in Johannesburg. He said many clients showed strong interest in the liquor, which comes packed in white porcelain bottles.

Many customers come back for frequent visits to the bar after tasting the liquor. Many even come from other provinces, beckoned by the call of Moutai.

Fangoma said that his bar is beginning to make cocktails with Moutai and he looks forward to seeing what surprises it will bring. 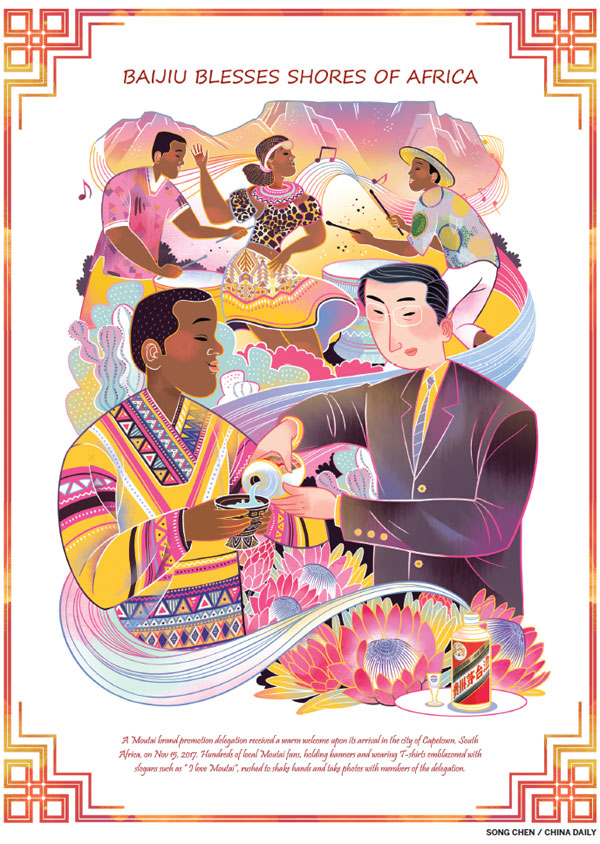