Thirst for Moutai up in growing UK market

Move over Margarita. Shove off Singapore Sling. In a few years’ time the next big thing could be a Moutai Mule.

Kweichow Moutai, the world’s most valuable liquor brand, is appearing on British cocktail bar menus in an experimental capacity and pundits say it could one day rank as a household name in Europe.

“I truly believe with the knowledge accumulated and the skill of mixing and developing the right cocktails, it could be a serious success,” says Andrew Robinson, the owner of Liverpool-based FU.

As Europe’s first dedicated Chinese baijiu bar, it has found a returning audience for its Moutai-infused cocktails.

It now carries 10-20 baijiu brands and serves them as shots infused with exotic ingredients such as vanilla, fruit, coffee and — this being Britain — Earl Grey tea.

“The original idea was to have an experimental food destination that was constantly evolving and bringing in something new,” says Robinson.

“After we made several trips to China, we discovered baijiu and Moutai and that evolved into FU, which means ‘good fortune’ in mandarin.” Kweichow Moutai derives its name from Southwest China’s Guizhou province. The province sits 1,100 meters above sea level on average and is known for its mountainous terrain, karst formations and as the home of the most prestigious and expensive of baijiu brands.

Moutai’s special qualities are said to derive from the natural environment in which it is produced and the conditions it is distilled under — the production and aging process takes five years and the spirit is distilled nine times in clay pots.

Usually containing no more than 53 percent alcohol by volume, baijiu, a clear liquor made from sorghum, wheat, barley or rice, is a heady concoction on par with Jose Cuervo tequila, Bacardi 151 and La Clandestine absinthe.

In China, baijiu is divided into five categories based on smell and taste but Kweichow Moutai would be considered as “spicy aromatic”, experts say.

As the creme de la creme of baijiu, it is often drunk at important Chinese State functions, and the brand is now making a strong international push.

In late April, the Kweichow Moutai Group signed an agreement with the United Kingdom’s Wine and Spirit Trade Association, to promote its brand in Britain.

Moutai executives say the company will move to establish the brand in five global markets this year with London cited as a launchpad to Europe, as the company aims to make its overseas sales account for 10 percent of revenue by 2020.

In 2017, Moutai Group exported 17.5 metric tons of Moutai liquor to the UK, generating nearly £2.5 million in revenue, according to the company. The UK is now one of Moutai’s fastest-growing international markets.

Over the last few years, China-UK friendship has continued to warm with the efforts of the leaders of both countries — welcoming in a golden era of China-UK relations, said Moutai executives.

This has had a direct impact on increasing trade relations: sales of British products such as Scotch whisky continue to grow in China; Moutai and other Chinese liquor brands continue to increase sales in the UK.

“I’ve tried a few varieties and I would say they are very approachable, flavourwise,” she says.

“It has a very confected pineapple note mixed with a slightly cheese note. I guess you could say it has umami (savoury taste), but it is a very powerful taste,” adds Davies, who works for one of the UK’s top importers of spirits.

Meanwhile, some 5 miles east of Oxford Street by Bank Station in the City of London, the newly-opened Demon, Wise & Partners proudly lists Moutai among its suite of Chi-nese baijiu drinks.

“We used to do a lot with baijiu at our sister bar, The Hide on Bermondsey Street, before we switched the concept last October to only selling drinks distilled in London,” says co-founder Paul Mathew.

“But at Demon we have a range of baijiu on the spirits list, including Moutai, and we offer cocktails to anyone who is interested,” adds Mathew, who worked with several Chinese liquor brands as an expat in Beijing from 2009-13.

From London’s Bank to Berlin, pockets of Europe are cottoning on to Moutai and baijiu, a pungent beverage that accounts for one-third of global liquor sales but is still largely unknown outside China.

“Sorry, never had any experience of it,” says Somerset-based Nick Moyle, author of Brew It Yourself. Trends take a few years to arrive in our parts of the world.”

Kweichow Moutai’s net income rose to $2.4 billion (£3.2 billion) in 2016, six months before it overtook Diageo, owner of the Johnnie Walker brand, to become the world’s most valuable distiller.

And now the company wants you to drink its premium baijiu, too. In fact, one of the biggest global evangelists for the beverage is not Chinese but a US citizen. Former China expat Derek Sandhaus was promoting Moutai long before he wrote Baijiu: The Essential Guide to Chinese Spirits, considered the imbibing bible of this strong-smelling, head-spinning spirit. 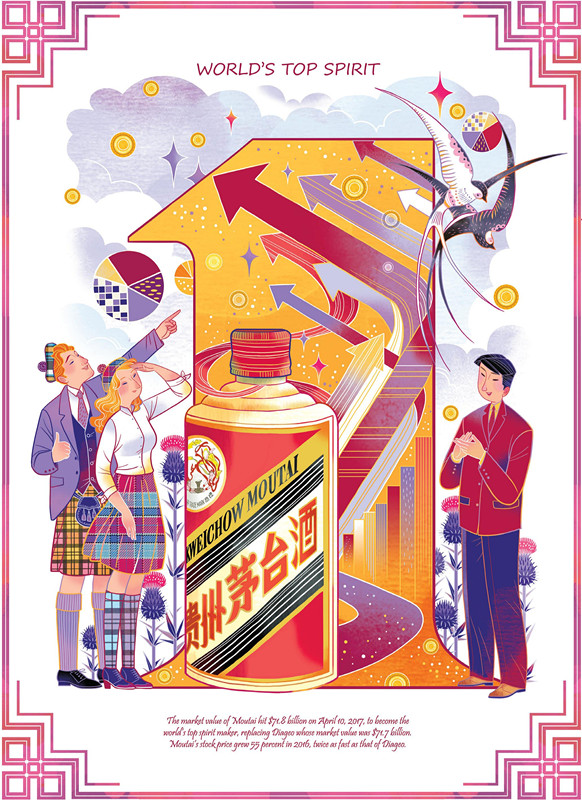 He recommends giving it a whirl next time you visit a Chinese restaurant — aficionados say it pairs well with Chinese food and should be promoted as such. “With Moutai, I think go big or go home,” he says. “You have to get the expensive stuff. Right now is an exciting time for baijiu. “There has been slow but steady progress in its internationalisation in the years since I published my book,” adds the Kansas native. “The most obvious indicator is the number of bars and restaurants overseas that have incorporated Moutai or baijiu cocktails into their bar programs.

“Another encouraging sign is that China’s larger and more prestigious distilleries have for the first time begun demonstrating a willingness to invest in products designed for international markets,” he adds.

This Aug 9 will mark the fourth World Baijiu Day, now celebrated at over 50 venues in more than 20 cities worldwide. The list includes Peking Tavern in Los Angeles, which offers an old Shanghai vibe and $7 baijiu cocktails all night during its “Thirsty Thursday” promotion, and the Golden Monkey in Sydney.

WBD is the brainchild of Beijing-based expat Jim Boyce, a Canadian wine lover who migrated over to the fiery Chinese spirit. “I think a lot of people are introduced to baijiu and Moutai the wrong way,” he says, referring to how it is typically consumed in shot form at room temperature. “I’ve got nothing against China’s ganbei (down in one) culture, but we are looking at different entry points amid a spirit of diversity.”

Boyce found the way to people’s hearts wasn’t through their livers but through their stomachs. At last year’s event, newcomers to the drink munched on baijiu pizza and baijiu chocolate. “I’ve read a lot over the last six years about how baijiu is booming overseas, but it’s still pretty tough to get people around the world interested,” he said.

Davies from Specialty Drinks suggests Moutai would benefit from an image makeover tailored to young, upwardly-mobile Europeans, who may consider the current branding “a bit too Chinese”.

Robinson is more gung-ho. He is mulling ways of franchising FU to spread Moutai’s appeal despite competition from other beverages.

“We would love to take this to another level,” he says.

Meanwhile, Moutai executives say they are “determined to make the UK a model market for Moutai going to Europe”.

“We will study the needs of European markets, innovate the products’ alcohol content and taste, continue to launch new types of products that suit UK consumers’ tastes, expand sales and promote the brand recognition and influence of Moutai in the UK,” he adds.