Zunyi site keeps the past alive

Rare are the places that make you feel like you're surrounded by history. Rarer still are the ones that make history feel immediate and relevant.

I experienced both sensations on Sunday during a visit to the site of China's pivotal Zunyi Conference in Guizhou province, which memorializes a meeting the Communist Party of China held during the brutal Long March.

Of the tens of thousands of Red Army troops that began the march - a strategic retreat from Kuomintang forces during the Chinese Civil War - only a small fraction survived. The conference, held in the middle of the march in January 1935, marked a decisive change in leadership, paving the way for Mao Zedong to take command of the Party and its armed forces. This, of course, proved successful, and 14 years later the People's Republic of China was born.

For some, this shows the importance of the Chinese experience in the revolution. Mao, Zhou Enlai and Zhu De, CPC members with deep roots in China, are contrasted with the Soviet-educated Bo Gu, a Red Army commander before the conference. While it's true that the socialist movement is international, I'm inclined to agree with this analysis. After all, we have the ultimate proof - the CPC's eventual triumph under Mao.

But to me, this is also a prime indicator of the CPC's ability to adapt and self-correct based on material reality and circumstances. Here we have a clear example: Errors that endangered the movement were handled, and the Party lived to fight another day. Bo remained an important figure in the revolution, though he lost his command.

Through this, we see a simultaneous respect for the past and a watchful eye on the present and future. Wu Dekun, deputy curator of the museum at the Site of the Zunyi Conference, told me as much when he discussed the summit's lasting significance.

So it wasn't hard to make the connection between the outcome of this fateful meeting and the China of today.

The CPC's eventual victory in the war can be traced directly to the changes made at the Zunyi Conference, and that victory has led to undeniably improved lives for the Chinese people.

Yet it's this comfort and prosperity that create distance between those early, desperate struggles and the rapidly modernizing country we know so well. When we're all absorbed in our daily lives it's easy to forget days gone by and think of history as something abstract and intangible.

Which is why sites like the one in Zunyi are so important. They reconnect us to our heritage, and remind us that these were real moments with real people, not mere paragraphs in a history book. 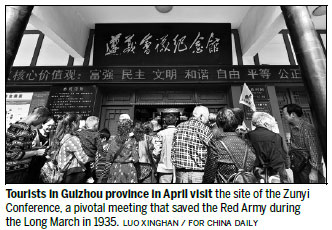