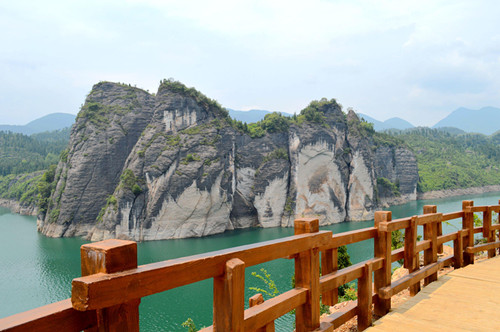 The village is the oldest village of the people of the Gelao ethnic group in the world, and the Gelao people are the first group of people in the world to study the technology of smelting cinnabar (as "Dansha" in pin yin), known by experts as the "ancestor of chemistry".

The Mother Stone of Heavens, the core area of the village, is the birthplace of the people of Gelao ethnic group and a sacred place where sacrifices are offered to the heaven and ancestors. The ancient Gelao ethnic village is the center of the Gelao people and the culture of cinnabar.

The sacred lake of cinnabar is the Gelao people's source of life and covers an area of 11.84 square kilometers

The scenic spot has been classified as a famous historical and cultural village in China, a demonstration site for national leisure agriculture and rural tourism, an ancient village with traditional Chinese ethnic characteristics, a provincial-level cultural relics protection unit, the number one ethnic village in Guizhou province, and one of the 20 key ethnic villages under protection in Guizhou Province.

Wuchuan county is striving to build the village into a sacred place for the Gelao people to trace their roots and offer sacrifices to their ancestors and a new destination for health-keeping and cultural tourism.

Best time to visit: All seasons

Hours of operation: All day