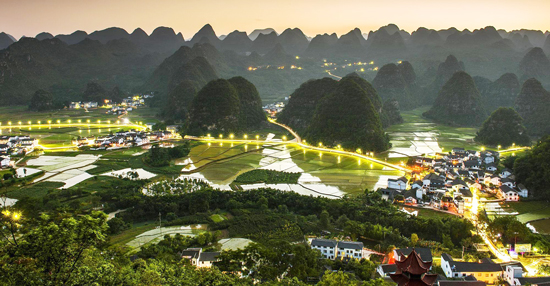 Nahui Bouyei village is situated on Xiawutun Street, Xingyi city, Guizhou province. Most of the villagers are of the Bouyei ethnic group. The word, "Na" in Bouyei language means "paddy field".

The people of the Bouyei have a great appreciation for water. The Nahui River flows from the northwestern part of the forest and runs beneath several stone bridges, linking several villages together.

Traditional Bouyei housing is built with stones, with the exception of the wingceltis rafters. The walls are constructed with 5-6 meter stones. The roof is covered with slate and paved into a well-formed rhombus or stretched into a scale-featured shape that is both light and safe. The stone houses can not only keep out wind and rain but also are simple and elegant. Even the desks, benches, stoves, hammers for hulling rice, mills, vats and other articles for daily use are all made of stone.

It is said that the Bouyei people traditionally had a custom of not living in the husband's home, which meant the bride would be taken back to her parents' home the day after the wedding. The bride could only visit her husband's home on significant festivals or during the busy season, but she would be sent back to her parents' home after several days. If the bride became pregnant, a family would be formally established. Otherwise, the marriage would be annulled.

Nowadays, the Bouyei people of Nahui village have not followed such custom longer follow such customs, but many traditional ceremonies, such as "singing with eight musical instruments", continue to this day.

Eight Bouyei villagers in blue and white cloth gowns play traditional Buyi instruments such as Niuguhu, Niujiaohu, Huluqin, Bamboo Flute, Yueqin, Leyou, Cigu and small cymbals, narrating the twelve sections of Bouyei wedding customs with twelve different tunes, including meeting, setting out on a journey, blocking the way, drinking the bamboo wine, wedding lamentation and sending the families. The melody is simple and smooth and resembles the sounds of nature.

What to do: You can rent a bike for 20-30 yuan ($2.89-$4.34) and explore the area, with its blue skies and endless rice fields. You can also take the environmentally-friendly battery tour bus around the area.