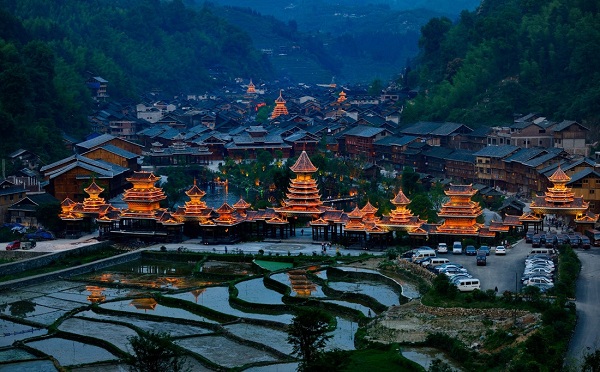 Zhaoxing Dong village is located in Liping county in Qiandongnan Miao and Dong autonomous prefecture, southeastern Guizhou and is the biggest and oldest Dong village in China.

In 2005, it was ranked as one of China's six most beautiful villages by Chinese National Geography. It has over 1,000 households and nearly 6,000 inhabitants. A small river runs through the village, which lies in a basin amidst green mountains with terraced fields creeping upwards along the slopes. The people of the Dong ethnic group live in timber houses built row upon row on the hillside.

The village is a wonderland of Dong festivals, singing and dancing. The village's most famous event is the Grand Song, a unique polyphonic folk music tradition that has been passed down for over 2,500 years. Visitors also have the opportunity to enjoy the hospitability of the Dong people.

The village is also well-known for its five beautiful drum towers, five wind-and-rain (flower) bridges and five theater stages. A drum tower is a multi-storied pagoda-like wooden structure built without the use of any nails. It is usually the tallest building in Dong villages and is used as a venue to host special events and ceremonies.

Best time to go: All year

How to get there: Take a bus from Liping county to Zhaoxing.