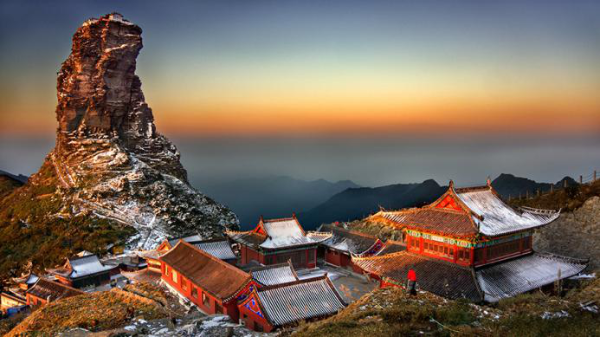 The spectacular landscape after a snowfall in Fanjing Mountain, in Tongren city, Guizhou province [Photo/chinadaily.com.cn]

The 2,572-meter-high Fanjing Mountain in Tongren city, Guizhou province, is one of the main peaks of the Wuling mountain range. It's a national nature reserve covering 567 square kilometers, an ideal destination for hiking and sightseeing as well as a holy site for Buddhism.

There are over 8,000 stone steps from the foot to the peak. Climbing along the winding path is a rewarding and fulfilling challenge. Visitors can feast their eyes on views of mountains shrouded in a sea of mist and clouds, steep cliffs, echoing caverns, ancient temples and all the attractions mentioned above. Those lucky enough may see the mysterious spectacle of Buddha's light, which attracts flocks of adherents.

Also home to an array of primitive vegetation and wild fauna, it was inscribed onto the World Heritage List by UNESCO at the 42nd World Heritage Committee meeting in Bahrain in 2018. Currently, 31 endangered plants and 19 threatened animals live in this protected area. The most precious wildlife and plant species include the golden monkey and the Chinese dove tree.

Unfortunately, the mountain has had to limit visitor numbers, among other measures to protect China's newest entry on the UNESCO World Heritage List. The plan allows no more than 23,480 visitors a day, which makes it necessary to be there a little earlier if you are visiting during China's holidays.

90 yuan during off season

2. The area has unpredictable weather so it is best to bring long raincoats.Raincoats work much better than umbrellas against the strong winds on the mountain.

3. Wear quick-dry clothes and fleecyjackets to keep warm in winter. Thin thermal underwear or sports underwear are suggested for tourists planning to take the cable car.