By Zhang Yangfei in Beijing and Yang Jun in Guiyang | chinadaily.com.cn| Updated: 2019-03-08 Print 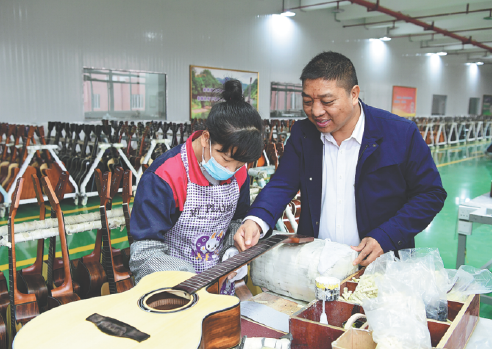 In 2013, Zheng Chuanjiu returned to Zheng'an county in Guizhou province to set up its first guitar factory.

Last year, the county produced and sold 6 million guitars worth about 6 billion yuan ($896 million), exporting to more than 30 countries and regions around the world, including the United States and Brazil. It also accounted for one-third of China's guitar exports.

The local government estimates that production will reach 10 million by 2020, with output valued at 10 billion yuan. The flourishing business has also helped lift 6,640 people in 1,278 households out of poverty, and had created more than 13,000 jobs by the end of October.

He will also propose that three counties in Guizhou - Wuchuan, Zheng'an, Daozhen - be incorporated into the nearby Chongqing economic zone, and be connected to railways to improve the transportation of goods.

"Wuchuan, Zheng'an and Daozhen are all poverty-stricken areas in Guizhou, and I think a large reason for that is because of the inconvenient transportation," Zheng said. "Although they have been connected to highways, they still lack a railway. I hope high-speed transportation routes can be built in the mountains."

Though Zheng was familiar with the 186 steps in making a guitar, he did not know how to pluck the six strings to play a song. During the NPC meeting last year, he set himself the goal of being able to play the guitar at this year's congress.

He arrived in Beijing on Saturday. In a video posted online by Guizhou Daily, he smoothly plucks the strings of one of his factory's Bessica guitars and sings, "I come from the mountains with a small guitar..."

Zheng left his hometown with his brother in 1995 to earn a living in Guangzhou, Guangdong province, where they learned guitar-making skills at a factory.

After they were promoted to management positions, they started their own guitar manufacturing business in Guangzhou, before deciding to move the business to their hometown in 2013 to boost the local economy.

With encouragement from the Zheng brothers, along with advantageous policies, more skilled musical instrument makers from Zheng'an began returning to their hometown to work. As a result, the industrial park - which is home to 54 guitar-related enterprises - flourished.

"At first, people could hardly believe that guitars played by world-renowned artists were made by a group of farmers living deep in the mountains," Zheng said, adding that it is precisely their hardworking spirit that created such fine professionalism.

Zheng's company is now the supplier for six of the top 10 guitar brands in the world, including Tagima and Ibanez.

However, Zheng wants to build an original brand that can make Zheng'an guitars known to the world.

"We are no longer satisfied with guitar manufacturing, so we've created our own brand," he said. Their independently developed Bessica guitar has gone into production and was displayed at the Music China exhibition in Shanghai last year.

The county is also planning to establish the world's largest guitar museum and a high-end concert hall, according to Wu Qi, the head of Zheng'an county.

"We will transform and upgrade the guitar industry from being an original equipment manufacturer to creators of independent brands, as well as elevate low-end products to medium-and high-end ones," Wu said.