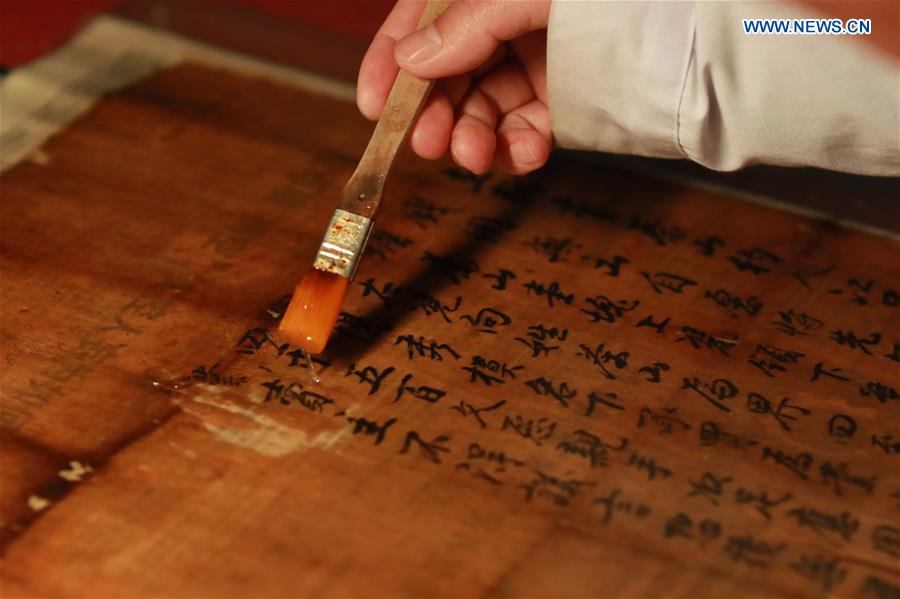 A staff member of a museum of Jinping Writs, conducts paper-pasting on a document at the museum in Jinping county, southwest China's Guizhou province, March 18, 2019. Dating back to the Ming Dynasty (1368-1644), "Jinping Writs" refers to the original records of contracts, account books, government reports, genealogy and county regulations in Jinping and adjacent counties inhabiting the Miao and Dong ethnic groups in Guizhou province. Jinping Writs were listed as documents of heritage by the State Archives Administration in 2010. Of more than 60,000 Jinping Writs being preserved, over 40,000 pieces have been restored and digitalized in the museum where Wang and his workmates have made strenuous efforts in the protection work for the ancient documents. They therefore earn a reputation as the guardians of Jinping Writs. A prefecture-level regulation on protecting Jinping Writs, as a legal guarantee to protect the time-honored documents, has been enforced since March 1 this year. [Photo by Ou Dongqu/xinhuanet.com]