An educationist from the Miao community talks of the importance of education at the annual legislative meetings, Xing Wen and Yang Jun report.

The crimson color of her garment, the unhurried way in which she speaks and the ready smile on her lips show the confidence and elegance of the Miao woman.

"I dressed up like this to showcase the culture of the Miao people," says Zeng.

"I would like to tell foreign friends about us and the changes my hometown Guizhou has been undergoing."

She says she proposed at the two sessions earlier this month that Guizhou province should have more postgraduate and doctoral programs in local universities to support its social and economic development.

According to her research, the postgraduate-to-undergraduate student ratio in Guizhou's universities "currently stands at 0.053 to 1". And there are only four universities in Guizhou that offer doctoral programs.

Zeng says with more local talent graduating with postgraduate or doctoral degrees from local universities entering the local workforce they could quickly "throw themselves into the development of Guizhou without needing much time to adapt to the local environment" as outsiders would.

Zeng, who was born in a small village in Kaili city in the Qiandongnan Miao and Dong autonomous prefecture, knows how important education is for ethnic students to upgrade their lives.

She has obtained two master's and one doctorate in education, applied linguistics, English and literature, but since her college years, Zeng says she faced difficulties in learning English compared with many other classmates whose mother tongue is Mandarin.

When studying applied linguistics at the University of Luton in the United Kingdom, she says she spoke in a heavy accent influenced by the Miao language.

"That made me frustrated, and I was determined to improve my pronunciation and find better ways for ethnic students to learn foreign languages," says Zeng, who later worked on optimizing teaching methods and the curriculum so ethnic people could learn a third language easily, and she put the research results into her doctoral dissertation.

She also did survey in some primary schools in Guizhou's rural areas and found that the students used to learn English vocabulary and grammar by rote and pay less attention to the pronunciation.

"There's a pressing need in rural areas for more qualified teachers capable of helping them learn the language through exposure to grammar and vocabulary in context," Zeng says.

Zeng, who's also the director of the GMU's school of international education and head of its international exchange and cooperation office, has been a witness of the progress made by the university in working with overseas counterparts over the past decade.

And though Guizhou is not a province bordering any country, its local universities have actively participated in and benefited from the annual China-ASEAN Education Cooperation Week since its launch in 2008, an event attended by faculties from universities in China and members of the Association of Southeast Asian Nations.

Zeng says the university puts so much emphasis on international exchanges that currently its school of international education has more than 380 foreign students, a large part of whom are from ASEAN countries.

The GMU also provides opportunities for Chinese teachers and students to take part in exchange programs and attend international meetings.

Zeng herself was part of a visiting scholar's program at the Western Carolina University in the United States last year.

Zeng and her colleagues also have set up booths at educational expositions in the US, South Korea, Vietnam, Indonesia and some European countries to promote Guizhou's higher education.

"Guizhou Minzu University is unique in its study of the arts, culture and history of ethnic groups like Miao and Dong, and I hope international students can help spread and pass on what they have learned here," says Zeng.

"We need to shoulder the responsibility to protect ethnic cultures as well as promote talented people for ethnic areas." 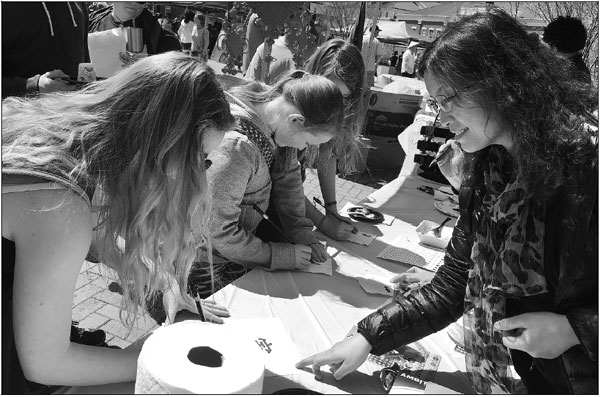 Left: Zeng Li lectures about Chinese culture at the Swain Middle School in the United States in 2018. Right: Zeng on campus at the Western Carolina University. [Photos provided to China Daily]