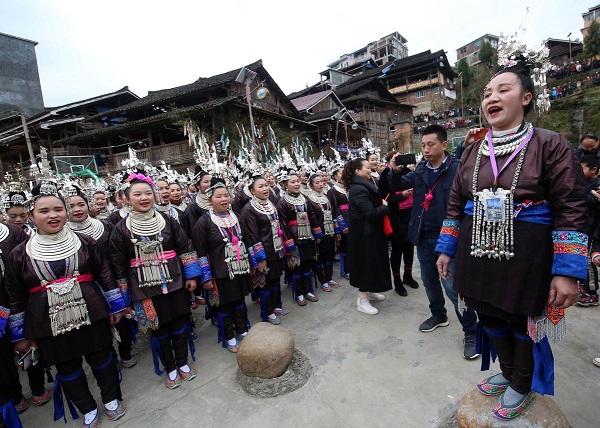 A performance of a Kam Grand Choir is staged at Dingdong village in Qiandongnan Miao and Dong autonomous prefecture, Guizhou province, for tourists. [Photo/Xinhua]

Hu Guanmei, 64, has never quarreled with her family, and she said the secret to a peaceful home life is to sing Dong folk songs.

"We Dong people love singing Dong songs. It's our tradition and favorite form of entertainment," she said, adding that all her family members forget their troubles when they sing Dong songs together.

The folk songs of the Dong ethnic group are performed by a group of singers called a Kam Grand Choir. The performance is not accompanied by musical instruments and the songs are polyphonic with multiple overlapping melodies. Dong songs were added to the World Intangible Cultural Heritage List in 2009.

Hu was born in a village in Qiandongnan Miao and Dong autonomous prefecture, which is regarded as the birthplace of the Kam Grand Choir, in Guizhou province. She started learning Dong songs from her parents at the age of 3.

The songs are about the legends of the Dong people's heroic ancestors and the wonders of Earth's creatures and give Dong people a positive attitude toward life.

When Hu married in 1973 and moved to her husband's village, she had already mastered around 400 Dong songs. A mother of three, she and her husband started to teach them Dong songs, just as her parents did to her.

"My parents told me when you are happy, sing, when you are sad, sing too. Singing Dong songs keeps worries away, and I want my children to be happy," she said.

Under Hu's guidance, her two daughters became excellent singers and have won many music competitions and performed in France and Spain.

"We have learned not only singing skills but also life lessons from our mother," said Hu's daughter Yang Xiuzhu, adding that Hu always tells them that life is like singing in a Kam Grand Choir, where everybody cooperates.

In addition to teaching her children, Hu has also been teaching children in her village of 716 residents.

Hu's 39-year-old daughter-in-law, Yang Huanzhen was one of her students.

"She always smiles and is kind to everyone. She is patient and never gets upset in front of the kids," Yang said.

She said Hu's kindness and optimism had impressed her and they have always got along.

"I have never seen a member of my family quarrel with others since I got married to her son," she added.

The more Hu brings joy to people, the harder she works.

In recent years, she has been much busier. After the local government decided to introduce Dong songs to local schools to pass on the culture, Hu was invited to teach at primary and secondary schools.

"I teach kids to sing Dong songs at the schools twice a week, which makes me really happy," Hu said.

Student Yang Caiyun, 10, said: "We spend most of our spare time with master Hu both at school and at her home, and we love her and treat her as our grandma because she loves us and treats us as her grandchildren".

Hu said that "kids are the future and we need them to pass on our Dong culture and bring more joy to more people".