To implement the decisions and policies made by the CPC Central Committee -- and win the battle of the prevention and control of the contagion caused by the coronavirus -- Party members at various levels in southwestern Guizhou province have stood up and pledged themselves to defeating the epidemic.

Gan Yuanhua, secretary of the first Party branch at the First People's Hospital of Guiyang's surgical department, volunteered to take part in the epidemic prevention and control on Jan 24, which was also the Lunar New Year's Eve.

Since he began working in 2005, Gan has not spent a Chinese New Year at home for 12 years. As deputy director of the neurosurgery department, Gan is in charge of the patients in a critical condition, who need extra care during holidays.

Following Gan, all 12 Party members of the Party branch united and said they were ready to contribute to the battle.

On Jan 26, Guizhou sent the first batch of medical teams to support the epidemic prevention and control in central  Hubei province, epicenter of the outbreak. Tongren People's Hospital organized a medical team of six staff members, including three Party members.

"As a Party member, it should be my turn to go to Wuhan and support the epidemic prevention and control," said Chen Lu, a medical staff member with 14 years of nursing experience at Tongren People's Hospital.

Yu Qian, a Party member and nurse at Qinzhen First People's Hospital in Guiyang, gave up her holiday and signed up for the makeshift medical team treating infected cases.

"It is my honor to be chosen to join the battle of epidemic prevention and control; I wish to make more of a contribution to tackle the virus as soon as possible," Yu said.

Outside the hospitals, Party members from grass-roots units stayed on duty to screen the floating population and spread the word about epidemic prevention and control.

A Party member in Xindian town, Yuping county, in Tongren, spreads the word about epidemic prevention to villagers. [Photo by Long Qin/Xinhua]

Officials from the neighborhood committee office of Zunyi Road subdistrict in Nanming district in Guiyang, gave up the Spring Festival holiday to screen the 40,000 residents under their jurisdiction and check body temperatures of the passengers at Guiyang Railway Station.

According to Zhao Tao, director of the committee office and a Party member, the grass-roots unit is playing a key role in epidemic prevention and control.

By making full use of their experience in social governance with big data technology, their efforts in population screening will achieve the goal of preventing the import of the epidemic, its breakout and then its export.

During the past few days, Guizhou government departments at all levels committed to prevent and control the virus without rest. Taking Xujiaba town in Sinan county as an example, over 300 Party members stayed on duty to keep the public away from the virus.

Guizhou's medical team heads to Hubei to prevent and control the virus. [Photo/gog.cn]

The poverty alleviation team at Sanhui village in Xujiaba town became a leading example of epidemic prevention and control.

"We have checked and recorded all 191 families at Sanhui village. Meanwhile, we will carry out epidemic information promotions every day with loudspeakers and demonstration cars to cover the whole village", explained Zhang Zehao, secretary of the Party branch at Sanhui village. 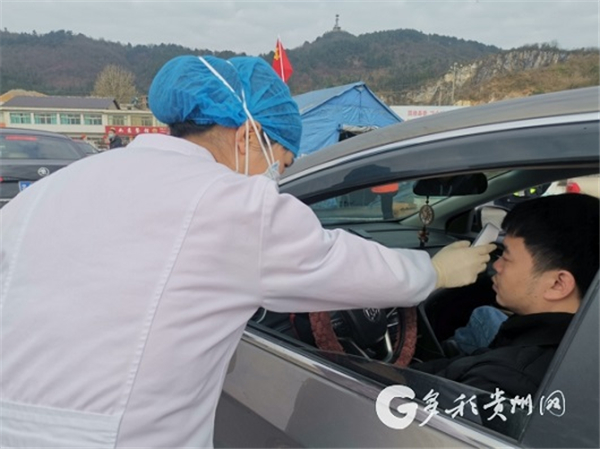 A medical staff member checks the body temperature of a driver. [Photo/gog.cn]