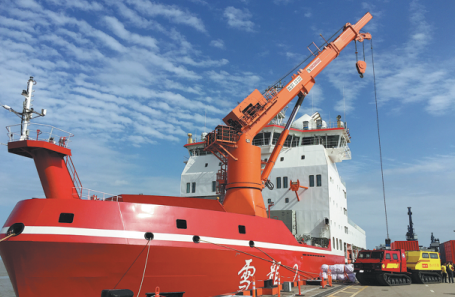 Guiyang, capital of Guizhou province in Southwest China, will promote opening-up and accelerate the construction of an economic hub under the integrated development of Guiyang and Guian New Area, said Chen Yan, city mayor at Guiyang's fifth session of the 14th people's congress on May 13.

Intelligent manufacturing is an important way for Guiyang to promote a new round of high-quality opening-up. The city will focus on the construction of experimental economic zones, key cities of the international land and marine trades, and national middle and high-end consumer goods manufacturing bases.

The city also plans to promote the manufacturing industry with digital, intelligent, high-end and large-scale infrastructure that can build precise, intelligent and reliable brands in Guiyang.

The company has made innovative technological advances, developing China's first polar all-terrain vehicle to be used in scientific research in Antarctica. The vehicle won the China Grand Award for Industry.

The high-level opening-up in Guiyang also has helped the company to expand its businesses worldwide.

Cao Xuhong, deputy general manager of Jonyang Kinetics' import and export division, said although the global economy has been affected by the coronavirus pandemic, the company has confidence in its African markets and has sent four employees to Africa to develop business.

The company began its presence in countries and regions involved in the Belt and Road Initiative in 2015. It set up a marketing center in Kenya in 2018, which ranked in the top six in Africa among its industry competitors. Its competitors include construction machinery enterprises from the United States, South Korea and Japan.

In China, the company's import and export volume increased around 10 percent year-on-year in the first quarter of 2020, laying a solid foundation for overseas sales, Cao said.

The expansion of business has allowed for the upgrading of technology. On May 10, a project led by Guizhou Jonyang Kinetics on the technological research and industrialization of emergency rescue and obstacle-removing vehicles was approved.

The project broke the monopoly held by foreign companies, formed a key technology system with independent intellectual property rights, and improved the design and manufacturing of emergency rescue equipment, according to industry insiders.

With the development of the big data industry in Guizhou, companies in the province have grown rapidly and are promoting a high-level of opening-up.

As a unicorn enterprise of internet logistics, Manbang focuses on cloud computing, big data, internet and artificial intelligence technologies, and has set up a supply information network nationwide to provide integrated services for trucks.