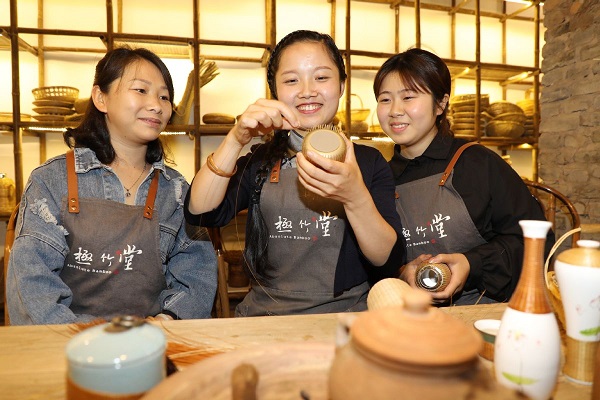 What Yang, a member of the Miao ethnic group from Chishui, Southwest China's Guizhou province, has been doing over the past decade is exactly in line with her proposal.

Supported by the local government, Yang founded her bamboo weaving company in 2012 and named it "Hand in Hand" in the hopes she could hold more locals' hands, pull them out of poverty and help them get rich.

Delicate and creative bamboo products including vessel covers, bags and paintings, are sold under the brand Absolute Bamboo through physical stores, expos and e-commerce platforms. 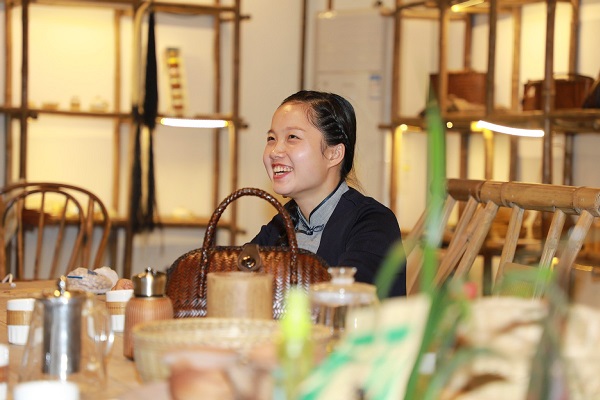 Yang Changqin sits by a table on which bamboo-weaving handicrafts are displyed, in Chishui, Southwest China's Guizhou province, in May 2020. [Photo by Wang Hong/provided to chinadaily.com.cn]

Aside from adding jobs and increasing her country fellows' incomes, the boom of Yang's company is further shared by the local community.

As her company was invested with the government's special poverty alleviation funds, 177 registered poor households can enjoy the company's dividends.

"So far nearly 120,000 yuan has been paid as dividends to our village," Yang told China Daily website on May 21.

In 2019, Yang transformed the premises of a relocated school into a production and training base in her hometown Datong township.

So far, more than two thousand people, young and old, from near and afar, have "graduated" from the center and acquired fundamental bamboo weaving techniques, Yang said. 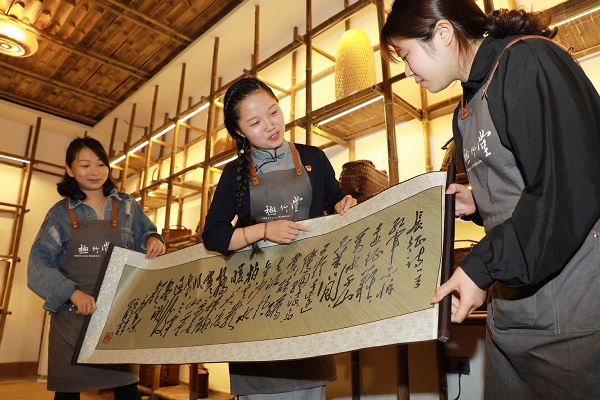 Yang Changqin, middle, shows a bamboo-weaving painting at her workshop in Chishui, Southwest China's Guizhou province, in May 2020. [Photo by Wang Hong/provided to chinadaily.com.cn]

Chishui city has currently about 200,000 people engaged in bamboo planting, processing and tourism, nurturing an industrial chain underpinned by 88,553 hectares of bamboo groves, according to a report from Xinhua News Agency.

"For example, I've had a really hard time seeking marketing channels, taking our handicrafts on the road to various expos around the country for potential customers."

The inheritor also emphasized the significance of subsidizing inheritors.

"Acquiring the craft takes months, and becoming adept, years. To ease the financial burden of inheritors and keep them motivated, direct subsidies are indispensable."

Born in 1990, Yang was recognized as a provincial-level inheritor of Chishui bamboo weaving in 2015, making herself the youngest inheritor of this heritage.