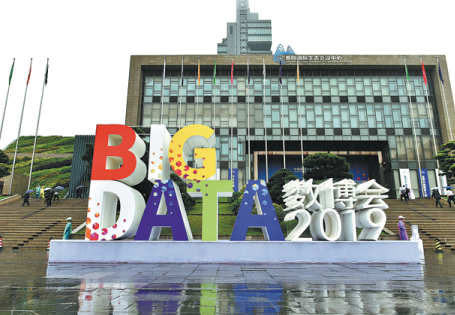 Since its launch in 2015, the China International Big Data Industry Expo in Guiyang, Guizhou province, maintains its focus on industry frontiers and win-win cooperation. CHINA DAILY

Guiyang in Southwest China's Guizhou province is ramping up its efforts to be the digital valley of China. Cutting-edge technologies are thriving in the city, bringing changes to the local economy and people's lives.

In just a few years, Guiyang has attracted Fortune 500 companies including Intel, SAP and Foxconn and drawn many leading companies in big data such as CLP, Qihoo 360 and iFly Tek.

According to local officials, digitalization is an important driving force in Guiyang's high-quality economic growth.

Of them 23 were newcomers, with revenue of 8.8 billion yuan.

To date, there are a total of 3,968 5G base stations across Guiyang. The government is now able to handle all administration procedures online.

During the novel coronavirus outbreak, technologies provided by tech companies in the city have played a prominent role in keeping people safe and healthy.

Guizhou-based internet medical company Longmaster launched a free online consultation platform to address health queries in January, offering a glimmer of hope for those wary of the virus.

In Guiyang, software robots made by artificial intelligence company Xiaoi Robot Technology have carried out essential work amid the outbreak. They are programmed to answer questions about the pandemic and make phone calls to those in need.

For people who were unsure if they were allowed to return to work after Spring Festival, the company developed another robot that presents real-time information. 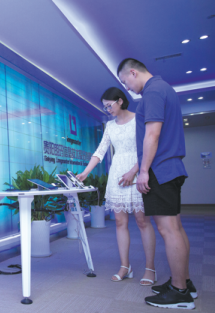 A staff member from Guiyang-based Longmaster Information and Technology introduces its product to a visitor. CHINA DAILY

"Our company is mainly providing data analysis of the pandemic and software robots for government, enterprises and third-party platforms, in order to minimize human-to-human contact and reduce work intensity as well as improving efficiency of tracking infections," the company's Vice-President Wang Hao said.

Moreover, the role of 5G network in transforming healthcare has been acknowledged. Many say the 5G-enabled temperature monitor developed by China Unicom's Guizhou branch has been a magic wand.

Chen Yan, mayor of Guiyang, said that Guiyang will fully develop its digital economy and lead scientific and technological innovation in 2020. The city will promote deeper integration of data-related companies and build an information technology cluster as soon as possible.

Chen added Guiyang aims to support the digital economy and related industries to reach more than 100 billion yuan in revenue.