Inheritor weaves her way into a better life 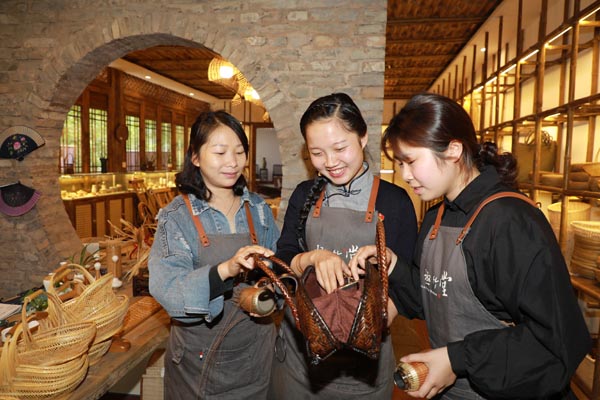 For Yang Changqin, a 30-year-old provincial-level inheritor of the intangible cultural heritage of Chishui bamboo-weaving, the craft has not only changed her life, but also helps many people in Chishui－a county-level city in Southwest China's Guizhou province－to shake off the shackles of poverty.

Yang, who is a deputy at the third session of the 13th National People's Congress, was born to a poor family in Yinjiang Tujia and Miao autonomous county, Guizhou, in 1990. Her father passed away when she was young and, after graduating from junior high, she dropped out of school to work and support her family. After a year of trying various jobs, including sales, waitressing and cooking, she collected some money and applied to study preschool education at a local vocational education center.

In 2007, just as Yang was about to complete her course, as one of the school's top students, she got offered the chance to join nine other classmates on a six-month excursion to learn the bamboo-weaving craft from Chen Wenlan, an inheritor based in Chishui－a city which calls itself the hometown of bamboo in China, and boasts a bamboo forest of 88,667 hectares.

"At first I often cut my fingers, making it hurt too much to hold chopsticks at mealtime, but I also started to take a fancy to the handicraft," recalls Yang.

Yang's talent and diligence soon attracted the attention of Chen. "Yang is clever and deft, and studied very hard. She quickly understood the many techniques I taught her, and I believe that she has a talent for the handicraft," says Chen.

Back home, when she finished her course, instead of finding a job as a kindergarten teacher, Yang made the decision to return to Chishui, and Chen, to continue learning the craft.

"I often felt pity for the loss of traditional crafts and the culture contained within them, so I wanted to inherit this craft and call on more young people to learn it." 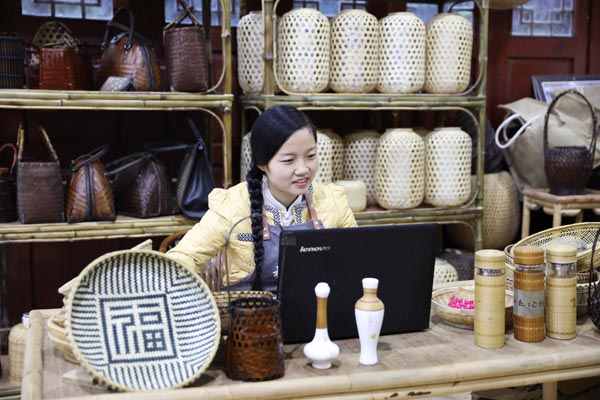 In 2012, Yang started a business to sell bamboo-woven products, like jewelry, tea sets and bags after seeing a business opportunity through the craft. "If you sell a bamboo, you can get 6 yuan (84 US cents) at most, but if you sell a bamboo-woven product, which is meticulously crafted, you can get several hundred yuan or even a thousand," says Yang.

Her company has gradually developed from a four-person operation when it was established into a company with 106-strong work force and 12 patents. In 2019, the company's sales volume reached 6 million yuan as its products were sold all over China, and even abroad.

Yang also established an intangible cultural heritage base in Chishui, which combines production, processing, display, research and training of the craft. Since Minzu county, where the base is located, is an attractive place with a number of tourist attractions, Yang hopes the base will become a part of the local tourism circuit in the future.

Growing up in a single-parent family, Yang understands the plight of "left-behind children" and the elderly. As a result, she has taught many local women to weave bamboo. They now produce bamboo products for Yang from home, where they are able to take care of the family instead of migrating to faraway areas to find work. So far, she has helped more than 100 local women in this way.

According to Huang Yongqiong, a woman who works with Yang, "I used to do farm work at home but could only earn just enough money to eat. Now, by learning the craft from Yang and making bamboo products, I can earn about 4,000 yuan a month."

"My company is named Qianshou, which means 'joining hands' in Chinese. I want to take more people's hands and guide them to engage in the bamboo-weaving industry."

Many people admire Yang's record of starting a business at 22, becoming a provincial-level inheritor of an intangible cultural heritage at 24, and being elected as a deputy to the 13th NPC at 28, but behind the success are unknown hardships.

She faced many difficulties in starting her business, especially in collecting funds, organizing groups and establishing sales channels. During the worst of it, she was in debt to the tune of nearly 1 million yuan, which impacted her health.

"From the early stages of my life to when I started the business, I met various difficulties. However, I believe there is always a way of scaling every obstacle that appears in my life," says Yang.

During this year's two sessions, the annual gathering of the National People's Congress and the Chinese People's Political Consultative Conference, held in Beijing, she is focusing on the integration and development of traditional crafts and rural revitalization.

"By inheriting and developing intangible cultural heritage, we can develop special industries which can supplement existing revenue streams in rural areas and help people achieve a better life. I hope the government will offer more help so that traditional crafts can play a bigger role in rural revitalization, poverty alleviation and rural development."