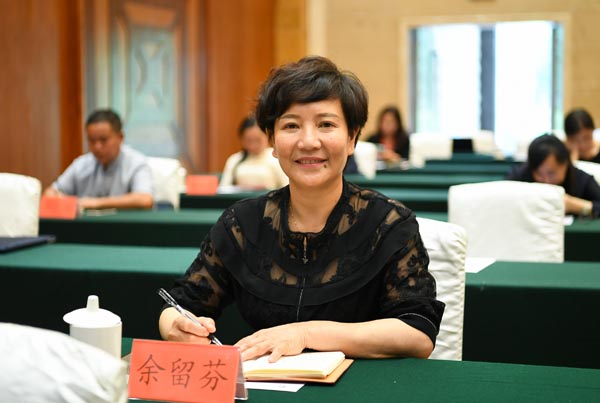 She helped change and transform Yanbo village. Without a proper road, electricity or water, the village became a model living area with the total assets of over 100 million yuan ($14.2 million) in 2020. A truly remarkable achievement.

When Yu was appointed to be Party chief of Yanbo, Southwest China's Guizhou province, in 2001, she was a little hesitant since the village was so poor.

"There was a saying describing the village at that time:'Villagers lived in adobe houses. Out of their houses there were ponds full of pig manure. Villagers worked hard doing farm work for a whole year but could only feed themselves for half a year. If you had a daughter, never let her marry a Yanbo man'," says Yu.

At that time, the average annual income of Yanbo villagers was less than 800 yuan, and the village was also in debt to the tune of 12,000 yuan.

"But I thought if I don't try to change the village, it will be poor forever. Why don't I try?"

The village is located in the deep mountains, and there was no road linking it to the outside world. Yu's first task was to rectify this.

Yu held several meetings with villagers to discuss the task. Some people did not believe in her ability, and doubted whether she would be able to solve problems.

What if the road occupied some farmland? Would there be compensation? She got the officials to use their own lands to compensate for villagers' occupied land and took the lead to work as a construction worker to build the road.

She went to villagers' homes at night to talk with them, and gradually persuaded them to support and join the work. Besides, she took out 40,000 yuan from her own wallet for construction.

After three months, the villagers under her astute leadership built a road of three kilometers, which laid the foundation for the village's future development.

Yu then started to consider how to improve incomes. She noticed a lush forest which Yanbo village once sold. After evaluating the value of the forest, she borrowed money and scraped together 230,000 yuan to buy it back. After careful management and by selling trees, the village paid back the borrowed money and earned an extra 80,000 yuan after only a year.

With the forest as a mortgage, Yanbo village applied for bank loans to open a brick company, a ham processing plant, a winery and a poultry farm, enabling villagers to buy shares and enjoy the fruitful benefits.

"Although Yanbo didn't have any market conditions at that time, I still believe developing a local economy through building an industrial chain is the key. Some people wanted to migrate to other places to do manual work, but I told them that cannot lift them out of poverty in the long run."

In 2011, she extended the scale of the winery, and built it into a large business, the Guizhou Yanbo Wine Co. After several years' development, the company's sales reached more than 400 million yuan in 2019, providing more than 650 positions for local people. In this way, Yanbo formed an industrial cluster with the wine business as the center.

"We use wine dross to feed livestock and poultry, use their manure as fertilizer for sorghum and other crops, and use the sorghum to make wine," says Xiao Yulong, head of Yanbo village.

Two neighboring poor villages, Yuna and Suzuo, were included in the development of Yanbo in 2016, and 3,650 people of the three villages have all become shareholders of the wine company. In 2018, everyone enjoyed a benefit of 1,500 yuan.

In 2015, Yanbo village was lifted out of poverty, with each villager's average annual income reaching more than 20,000 yuan in 2019.

Yu was titled a "reform pioneer" at the celebration event of the 40th anniversary of reform and opening-up by the central government in 2018, and earned the national May 1 labor medal in 2019 from the government.

"I have a sense of fulfillment when I see villagers walk on the wide and flat roads, and their smiles when getting benefits from our business. I really did something for them, and I believe I didn't waste my youth."

Although Yu was doubted by many local people when she started her work 20 years ago as a 31-year-old female official, now she enjoys great prestige.

According to villager Xiao Hailong, "Yu is brave and cautious. She can hit the nail on the head, and the businesses she led us to develop suit the demands of the market."

Yu says the government has helped a lot in her work.

She was elected as a deputy of the 13th National Committee of the Chinese People's Political Consultative Conference, top political advisory body of China. In this year's two sessions, Yu is focusing on rural development, and has asked the government to improve the infrastructure of remote mountainous areas and provide more funds for their development.