Huimin Primary School in Huishui county, Guizhou province, is a designated school for students from poor rural villages. The school currently has 1,128 students and has introduced minority languages and bamboo dance as a way of preserving local ethnic culture.

"Huishui is a county where Miao and Bouyi people are the majority. We have set up clubs for students to learn ethnic languages, culture and dance in their spare time," said Xu Zhonghua, principal of Huimin Primary School.

During students' daily exercise time from 9:30 am to 10:10 am, they can practice traditional entertainment such as martial arts and bamboo dance, as well as run and learn Chinese classics. It's part of the local government's campaign to combine sports and arts with academic study. 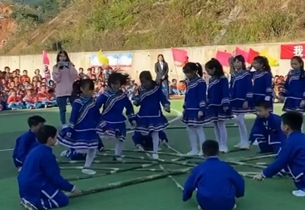