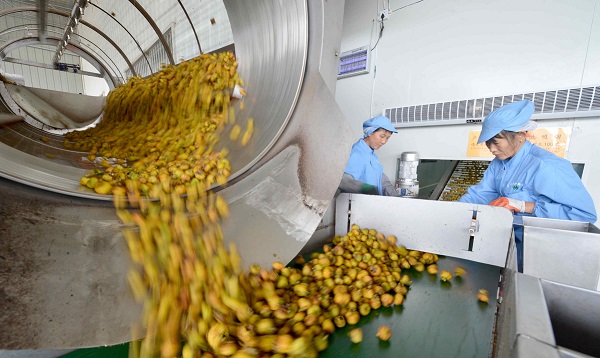 Over two decades ago, the residents of Chaxiang village in the mountains of Guizhou's Longli county depended on logging for a living.

The industry caused serious damage to the local environment and wasn't that lucrative, with the villagers' average annual net income no more than 400 yuan.

Today, with no more trees cut and more planted, the village has seen the per capita net income of its roughly 700 residents soar to about 13,000 yuan ($1,980), making it a potent example of "lucid waters and lush mountains" being "invaluable assets".

It also mirrors the country's efforts to build a moderately prosperous society in all respects, including a livable environment.

The change came thanks to a return-farmland-to-forestry campaign promoted by the provincial government, with local authorities helping the formerly impoverished village develop a fruit industry based on cili, a common local plant also known as the chestnut rose.

When experts from an agricultural institute in Guizhou's capital, Guiyang, visited the village to select seeds of the wild fruit tree for commercial planting in 1995, most villagers were skeptical that its sour fruit could find a market.

When the provincial authorities decided to offer free seedlings in a pilot program, only Gu Qinglin chose to accept.

"Instead of being trapped in poverty, I wanted to try my luck," the 69-year-old said.

Villagers were impressed when, two years later, his family became the first one in the village to have savings of more than 10,000 yuan.

"I remembered the plot behind my house was only 2,000 square meters. I made 36,000 yuan from it," he said. "Retailers from Guiyang came directly to the orchard to purchase. The price was 6 yuan a kilogram. They scrambled to buy."

Three households soon followed in Gu's footsteps and invested in cili planting. Others, however, didn't have the money required to embark on the same path, even though they were eager to do so.

A preferential policy implemented by the provincial government soon changed that.

As parts of Guizhou's efforts to return farmland to forest, for eight consecutive years, farmers were offered annual subsidies of about 2.3 metric tons of grain and 300 yuan for each hectare of farmland they turned into a fruit orchard.

Lan Jiang, head of the village committee, said the area planted with cili in Chaxiang has now topped 1,400 hectares. The annual output value of the business stands at 50 million yuan.

The village now also boasts over 13 hectares of cili nurseries that can provide 6 million seedlings a year and bring in gross income of 6 million yuan, he said.

The increasingly livable environment due to the expansion of cili planting has also attracted tourists, bringing the villagers extra economic benefits. Some villagers have started rural resorts to cater to tourists, the committee said. All the villagers have now moved into villas and most families have bought cars.

With Chaxiang as a demonstration base, the cili business has been expanding to many other areas in Longli. Cili is now grown on more than 16,000 hectares of land, with an annual output value of 400 million yuan, and the county government said the industry helped lift 3,100 people out of poverty.

The development of Chaxiang has laid a good foundation for ongoing efforts to realize rural vitalization, said Luo Tianxiang, the head of Longli's forestry bureau.

"We will ramp up investment to further develop the industry," he said, adding that intensified efforts will be made to encourage universities and research institutes to engage in research and development of cili products.