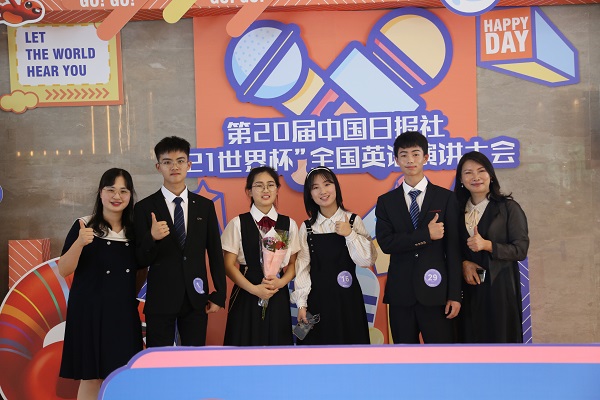 Candidates pose for a group photo after the competition. [Photo/China Daily]

About 100 candidates participated in the competition and delivered speeches themed around "What I believe in?" and "No ordinary, but extraordinary".

The candidates from the junior student team expressed their curiosity and desires. They all said they believed that knowledge can reshape destiny, making them better and more extraordinary people.

The senior student team gave examples of outstanding people, such as scientists, athletes, and ordinary people who inspired them. Their speeches expressed their ambition to break through themselves and strive for excellence.

Tao Jiarui, an eighth grade student from Guiyang No 17 Middle School, told judges that she wants to become an astrophysicist and has already read a number of related books.

Tao said that she is interested in the school's physics class, which just started this year, and is searching for more information online after class. She said she hopes to learn more about physics by reading more books.

Zhang Yu, a teacher at the Foreign Languages School of Guizhou Education University and a judge of the competition, said he was impressed by the candidates' performances.

Serving as a judge for several years, Zhang has witnessed Guizhou students' progress in English speaking competitions and their explanations of broad topics based on their own experience.