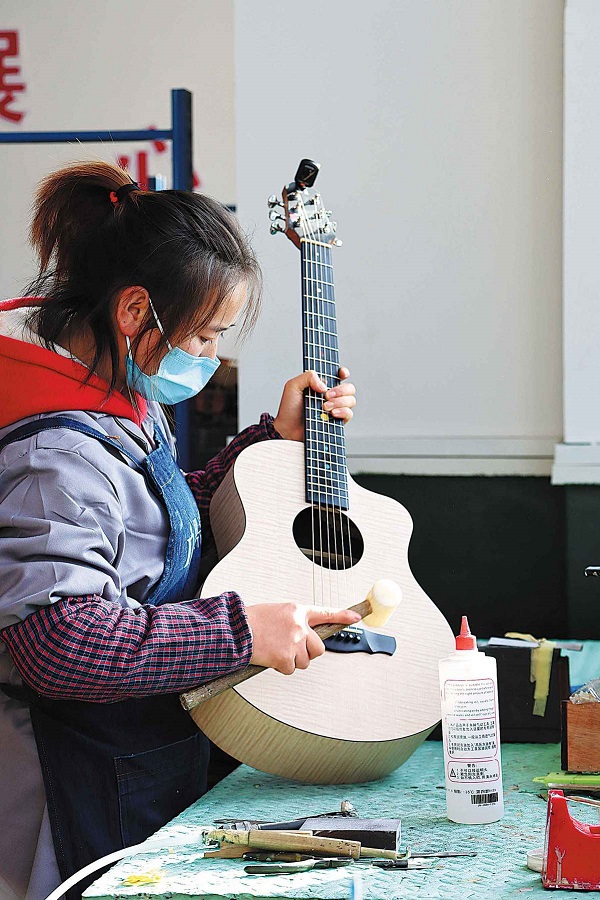 Watch the video
On a sunny April afternoon, Zheng Chuanjiu and his colleagues busied themselves packing and loading some 20,000 guitars.

"They will be transported to Guangzhou in Guangdong province then shipped to Japan, Germany, Brazil and Canada," said Zheng, general manager of Zunyi Shenqu Musical Instruments Manufacturing, one of the leading guitar manufacturers in Zheng'an county, Guizhou province.

"We signed contracts with 28 companies this year with orders for 700,000 guitars. To make sure they are delivered on time, we recruited 200 more staff to ensure daily production of 1,500 guitars."

In mountainous and landlocked Zheng'an, there is little arable land and industry, so people used to leave for other cities for work, said Pu Xing, deputy director of the management committee of the county's economic development zone.

Zheng, a native of Zheng'an, moved with his brother to Guangdong province to find employment and his first job was at a guitar factory in Guangzhou.

In 2007, with experience working on the production line and as a manager, Zheng and his brother opened their own guitar factory in Guangzhou.

"The Zheng'an government approached me and convinced me to move my business back to my hometown, with subsidized rent, water and electricity," Zheng recalled. "Lower labor and production costs here prompted me to start my factory. Furthermore, I also wanted to help people in my hometown to get out of poverty and live better lives."

The park is now home to over 110 guitar manufacturers and related enterprises including guitar sales and logistics. The annual output value of guitars has reached nearly 6 billion yuan ($890 million), with a sales volume of 6 million. It accounts for one-fifth of the country's production and sales volume, according to Ye Xiao, a member of the Party committee of Zheng'an county.

"I work on the electrostatic spraying section of the production line, making 4,000 yuan a month," said Liu Yiqun, a worker in Zheng'an. "I used to run small businesses with my husband in Foshan, Guangdong province. It was not easy to make money there. With my child about to go to junior high school, we decided to come back. I live in the park, so the factory is within walking distance, and we can also save on rent. It is more convenient here."

These guitar factories are luring people like Liu to come back to their hometowns.

"Many handmade processes are involved in the production," Zheng said. "Each guitar needs to go through over 180 steps, so around 150 to 160 workers are needed."

"If the string spacing is too high, it will be difficult for players to press, if too low, there will be noise," said Zhang Weiyi, a guitar craftsman working at Guizhou Shenqu.

By 2021, there were over 15,000 workers in the guitar park, and the once poverty-stricken county is now gaining notice worldwide as a guitar production hub.

Besides processing guitars for overseas brands such as Ibanez from Japan and Fender from the United States, Zheng'an has also developed its own guitar brands such as Weibo and Beijiaer.

"With the development of our own brand and the formation of guitar culture here, the guitar industry in Zheng'an will develop better in the future and people will also live happier lives," Zheng said.

Zhao Yandi and Zhang Chi contributed to this story.