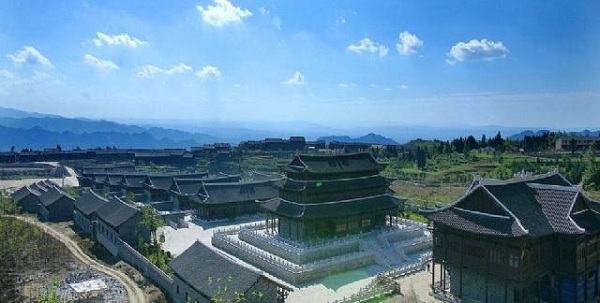 Bijie Dafang Ancient Yi Culture Tourist Area or Mu'e'ge ancient city is a national 4A-level tourism scenic area and one of Guizhou province's 100 tourist spots. It is situated in the northeast corner of Dafang county and covers an area of 4.5 square kilometers. "Mu'e'ge" is a transliteration of Yi language, meaning royal city.

The ancient city stands at a height between 1650 and 1800 meters and has an average annual temperature of 11 C, making it an ideal destination for leisure and avoiding the summer heat.

In the early Ming Dynasty (1368-1644), madame Shexiang, an outstanding Yi female politician, designated Mu'e'ge as the ruling residence and led ethnic groups to live harmonious lives there. She made great contributions to the unity of the country and its ethnic groups.

The ancient city has a number of historical sites and ancient architectural buildings, including several important heritage sites under state protection such as the tomb of Madame Shexiang, the Museum of Shexiang, the ruins of Muege castle, Qingyun building and Doulao building. It also has Yi Cultural Street integrated with natural landscape and cultural scenes.

Construction on the ancient city began in 2011, with the aim of building it into a national tourist destination and the most famous Yi culture tourist area in China.