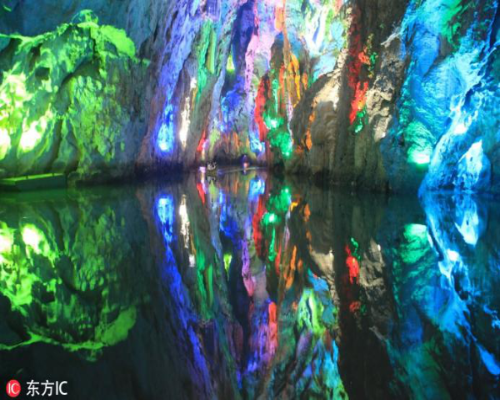 Sitting in Southwest China's Guizhou province, Loong Palace is 116 kilometers from the provincial capital, Guiyang, and only 30 km from the world-famous Huangguoshu Waterfall. Opened in 1984, the scenic area covers 60 square km, 18 sq km of which have been developed into core tourist resorts.

Combined with caves, canyons, waterfalls, peaks, cliffs, rivers, a stone forest, an underground river and other karst geological features, Loong Palace is also known as "the museum of the karst landscape".

According to the China Atomic Energy Authority, Loong Palace has the lowest natural radiation in the world. It also features the biggest single piece of farm land in the shape of a Chinese character, "Long" (meaning "Chinese dragon"). The hospitality of the Buyi and Miao ethnic groups adds a strong human touch to the cluster of natural wonders.

Children no taller than 1.4 meters or no older than 13 years can visit the park ticket-free in the company of ticket-holding adults.

From 7am to 6:30 pm, there is a non-stop bus line from Anshun East Station to Loong Palace.