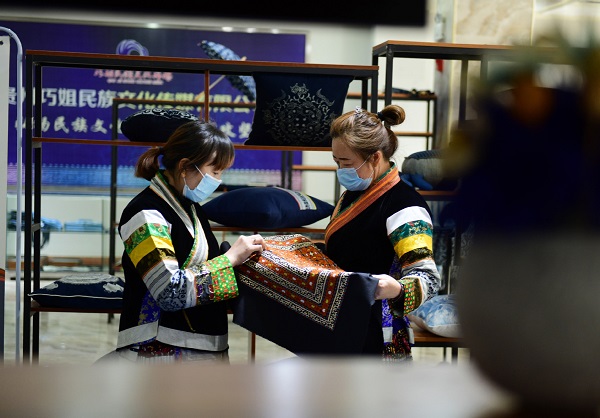 Yang Mei (left), founder of an embroidery cooperative in Zhijin county of Guizhou province, communicates with a colleague. [Photo by Shang Yujie/provided to China Daily]

Guizhou province, nestled among the hills in Southwest China, is the place with the second-largest outflow of workers in the country. In 2018, the number reached 9.28 million people, which equates to a quarter of its permanent residents. As large groups of young men choose to leave to seek better pay and jobs with greater stability in more industrialized cities, most women stay home to take care of the children and the elders.

However, since the provincial government launched its Jinxiu Plan－to promote the development of the local handicraft industry－in 2013, around half a million women in Guizhou have found employment closer to home with the more than 1,000 handicraft enterprises and professional cooperatives that make up a 6 billion yuan ($849 million) industry.

The rich culture of ethnic groups in China, including embroidery and batik techniques they have learned since childhood, is now a ticket out of poverty for those housewives, and even the coronavirus outbreak can't stop them from earning a better living. 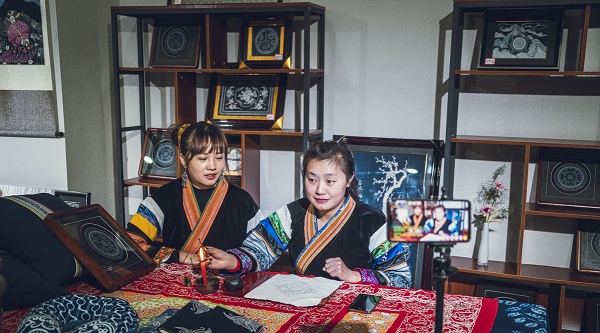 Embroiderers in the county present ethnic works through livestreaming during the coronavirus outbreak. [Photo provided to China Daily]

Yang Mei, 45, is from Qimo subdistrict of Zhijin county, Bijie city of Guizhou. Together with her husband, she moved to Guiyang, the provincial capital, one year after they got married. For about 20 years, they built brick walls, transported sand and carried stones in baskets on their backs at construction sites, earning a combined monthly salary of about 4,000 yuan.

Yang says they didn't have much choice.

"Embroidery is the only craft I know. However, in my hometown, there's hardly anyone who would pay well for it when almost everyone is a master of embroidery," Yang says. "We used to create embroidery just for daily use and self-gratification. For example, we would work for days to create a beautiful wedding dress with complex embroidery patterns that symbolize luck, in order to bless the marriage of the wearer."

One day in 2010, Yang was severely injured while unloading some sand. "I can never do heavy work again," she says, her words dripping with pain and regret.

After a year of recovery, Yang found a new job as an embroiderer at a company in Guiyang which sells products with ethnic cultural characteristics.

After six years there, in 2017, Yang returned to her hometown to develop the local batik and embroidery industry. She brought with her bundles of plain scarves and gathered several of the local women to add ethnic-style embroidery to them, before sending them back to Guiyang for sale. Surprisingly, the scarves sold very quickly.

In 2015, two years after the Jinxiu Plan was launched, Yang invested 50,000 yuan and established a cooperative with four other people.

It seemed to be a reasonable investment for Yang, especially when she learned that the provincial government would provide a special fund of 15 million yuan to support the plan every year. The China Women Development Foundation participated in the plan, which serves as the bridge between e-commerce enterprises from bigger cities and craftswomen who live in rural areas.

"Those companies show us the fashion trends, and we create the products as they want. They provide modern tastes, and we offer fine craft," Yang says.

So far, the cooperative has hired more than 300 needleworkers, including over 100 people who are regarded as poverty-stricken. The oldest is aged 69, and the youngest, who often offers help, is Yang's 8-year-old daughter.

"In our town, more than half of the males work elsewhere for a higher and more stable income. They only come back during holidays, or for funerals, which can only be hosted by men according to local custom," Yang says. "Before the Jinxiu Plan, most women, especially those over 50, earned little money by selling herbs that they had gathered on the mountain at street markets."

She adds that the changeable weather and daunting terrain makes collecting herbs very difficult and dangerous.

There are currently 67 professional cooperatives operating in Zhijin county, employing 3,500 women, including 2,200 people who have emerged from poverty as a result.

Yang reveals that the needleworkers can make between 2,000 and 4,000 yuan a month, and an increasing number of young women of their families are willing to work in their hometowns at jobs which offer a fair wage, and leave them plenty of time and energy to take care of family.

Luo Ying, 42, is in charge of an embroidery and batik cooperative in Chadian town of Zhijin county.

She used to work in a garment factory in Fujian province, before returning home to take care of the children and the elderly in 2012. Two years later, in 2014, she opened a store selling batik products in the town before establishing a cooperative with four other people in 2018.

Luo says during the years spent far away from home, the annual salary of around 10,000 yuan barely kept her fed, but her life got much better after the establishment of the cooperative.

She adds that the cooperative now employs more than 100 female embroiderers, including 73 poor people, and the income created last year reached 1.2 million yuan. The monthly average income for the craftswomen is between 2,000 to 6,000 yuan, depending on the workload and sales volume.

Due to the coronavirus outbreak, however, the embroidery business has met a bottleneck.

Yang and Luo both explain that they used to send representatives to first-tier cities to exhibit and sell embroidery products, but now, as people are encouraged to stay at home to avoid spreading the virus, they are not able to reach more consumers. As a result, sales have reached a low point.

According to Luo, from January to March last year, the cooperative completed orders to the value of 300,000 yuan. This year, though, since the women returned to work after Spring Festival in February, the cooperative has only received two orders with a total income of 70,000 yuan. Yang is facing the same situation.

"Many garment factories, which used to be our big clients, are still temporarily shut down," Luo says.

Many of the young women are communicating with consumers online via livestreams, presenting the embroidery process and chatting with viewers. One of Luo's most recent orders came from someone who has been following their livestream.

"As we can now support the family while doing embroidery at home, with the baby sleeping in the back and the elders by our side, we no longer have to make a living elsewhere, and the number of 'left-behind' children and 'empty nesters' is going down," Yang says. "We will conquer any challenge together, even the virus outbreak."