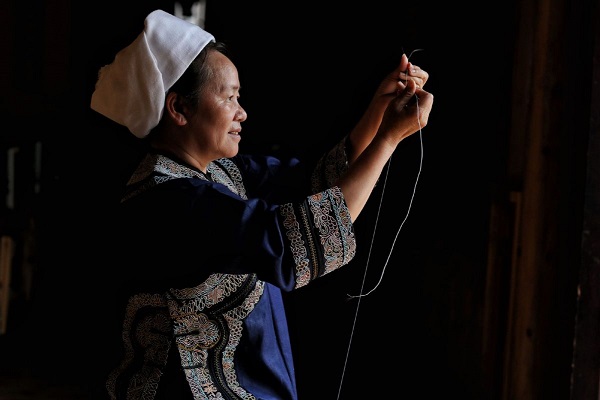 Horsetail embroidery was once a pastime used to while away the hours in Sandu Sui autonomous county, Guizhou province, but today it is a bustling industry employing thousands of people.

The craftsmanship involved in horsetail embroidery is distinctive to the county, which has a population of 400,000 people mostly from the Sui ethnic group.

"In the past, we mainly used horsetail embroidery for ourselves," said Wei Yingli, a provincial-level inheritor of the craft and head of an association involved in the industry. "We made embroidery when children were born or when our daughters married."

Wei said embroidering with the strands of horse hair was traditionally a hobby Sui women pursued to kill time when they were not working in the fields. These days, however, the craft is helping locals cast off grinding poverty.

There are two horsetail embroidery associations and five studios in Sandu, with more than 20,000 embroiderers. The number of small businesses engaged in the industry exceeds 80, and there are more than 10 brands.

Over 1,000 families have been lifted out of poverty, and last month the county was taken off the poverty list.

The craft was developed in Sandu, where the Sui have a tradition of keeping horses.

The process is complicated. An embroiderer usually takes three to four strands of horsetail hair and wraps them with white cotton thread.

The sewer then stitches the threads into the outlines of images or patterns drawn in advance. After that, colorful threads are used to complete the work, which usually decorate items such as garments, shoes and hats.

Wei said the completed works have "clear and bright lines" with a hard texture. The traditional craft is known as a "living fossil" in Chinese embroidery.

For a long time, horsetail embroidery stayed hidden away in the lush green mountains of Guizhou. The craft did not seem commercially viable as the process is time-consuming and most modern-day embroidery is done by machines.

The skills involved in horsetail embroidery were also disappearing as villagers were leaving the county to find better-paying jobs in the city.

But as China's anti-poverty campaign gained steam in recent years, improved transportation and infrastructure allowed more tourists and businesses to come to Guizhou. The changes helped the craft regain momentum.

To meet customers' demands, they have added modern twists to the embroidery, stitching horsetails into ornaments, clothes, suitcases, bedsheets and sofas.

Shi Hongsi left farm work behind to concentrate on embroidery. "In the past, it took half a year to a year to finish a piece, but now I focus more energy on the embroidery, and the sales channels are good," Shi said.

In Bangao village, Pan Xiao'ai has also inherited the skills associated with the craft. She has launched a horsetail embroidery studio, focusing on production, processing and sales. Almost every woman in the village has seized the opportunity to earn income from what was once a pastime.

Wei said the handmade products rely on high-end customers for their profitability, as mass production is virtually impossible due to the intricacies involved in the craft.

Wei Zhuping, head of a Sui culture research institute in Sandu, said it makes sense to lift people out of poverty through their culture and traditions.