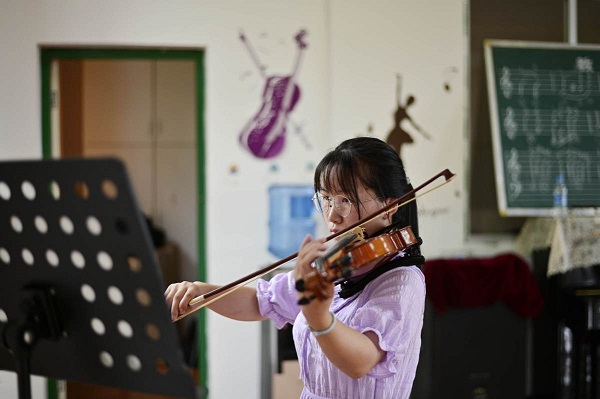 Students concentrate on the music as they practice violin in the music classroom of a middle school in Congjiang county, Southwest China's Guizhou province. [Photo by Wu Dejun/For chinadaily.com.cn]

Some middle school students from remote Congjiang county in Southwest China's Guizhou province have studied the violin since 2018 in a bid to develop these children's interests.

The middle school, which is in Qiandongnan Miao and Dong autonomous prefecture of Guizhou, has encouraged students to learn to play music. The school bought 32 violins and five pianos, and built a new music classroom, which allowed 24 students, including five from poverty-stricken families and 10 left-behind children, to join the music class in 2018, according to the school.

The violin class expanded its enrollment by 40 students this year. The students have participated many times in various cultural activities inside and outside the school. They wore Dong ethnic costume and played a Dong minority song on their violins to wide acclaim.

Che Weiwei in Guizhou contributed to this story.