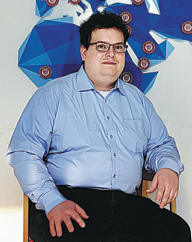 Filip Jordan, a 41-year-old Czech, has been a building services engineering teacher at Guizhou University for more than seven years. He said Guizhou is a natural jewel of China, and it deserves protection and care.

He has been enjoying life in Guiyang, capital of the mountainous province, and enjoys the scenery as well as the renowned local dish of fish poached in sour soup.

Jordan met his Chinese wife, also a teacher at Guizhou University, in Hong Kong when he went to the city as an exchange student in 2008. Later, he followed her to teach at the university. Their daughter was born in China and can speak Czech, English and Chinese.

Guizhou is quite different compared to a decade ago, when Jordan began living there. Now, he is looking forward to the completion of a new Guiyang subway line, which will make his commute between downtown and the university faster.

"When I first came here, I needed to bring my wallet and cash when I went out. Now, I just take a cellphone with me, and mobile payments are quite convenient. This phenomenon changes business in all of China and reflects its rapid economic development," he continued.

"People in my country still use cash, the traditional way. Some use Apple Pay, but it depends on the store. Chinese people accept new things easily and often make innovations. Food delivery services, online shopping and speedy deliveries have made my daily life more convenient and allowed us to have more time for work and family life," he said.

Jordan especially admires the high-speed railway that connects Guizhou and other provinces, as construction in the country's sole province devoid of significant stretches of flat lands, was more difficult.

"In the past, housing development was enormous for both cities and counties in Guizhou. New buildings improve people's living quality and social interaction and reduce the differences between cities and rural areas," he said.

Besides taking trips to other parts of the country, Jordan has traveled around Guizhou, which is home to 48 ethnic minority groups and a place that has preserved its environment and ethnic customs. He has been to the Zhijin Cave in Bijie, a karst cave with stone formations that offers respite from the summer heat.

"My family and my friend's family went there together. I had never seen such a big cave and such amazing karst landforms," he said.

At Guizhou University, Jordan has been popular at the school's English corner, where students have shown great interest in learning English. At the beginning, students thought of him as a rather serious teacher, but later they found him to be humorous and cordial.

More students started to speak in English and looked forward to attending the activities at the English corner. One of them also came to his office to practice English with him.

"Exactly, we are friends. The boy was taking a mining major at the beginning, but he likes English very much. I chose him to be my translator and helped him with his English studies when needed. Finally, he changed his major to study translation," Jordan said.

"My purpose in my teaching and association with students is to motivate and help them find their own interests. And if they do, I will encourage them to chase it. I think that's very important," he said.